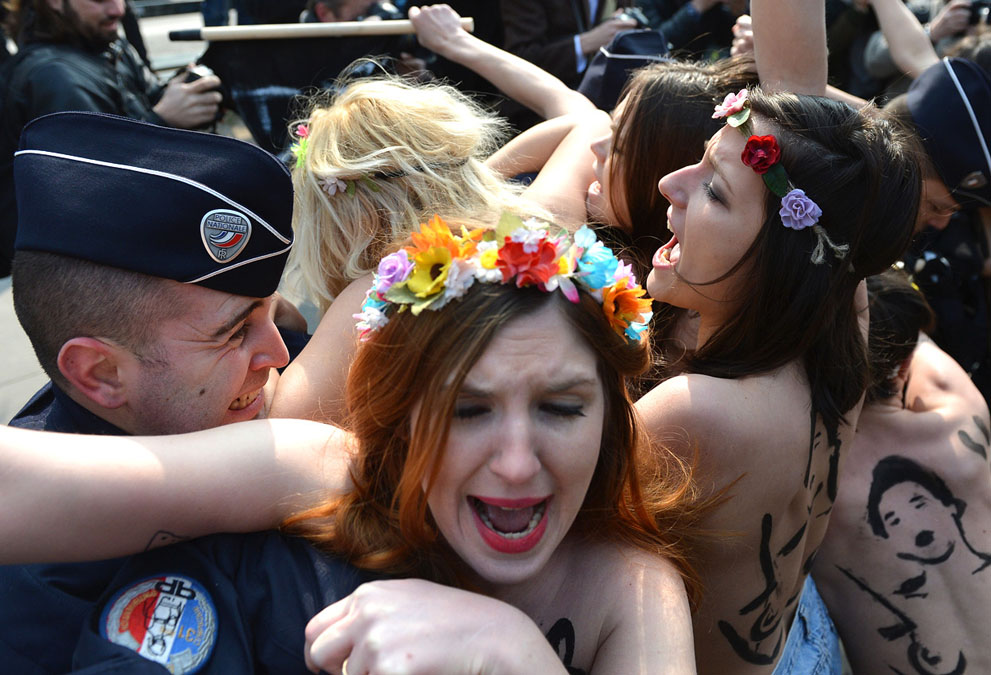 Recently members of the Ukrainian-based, global feminist group Femen staged protests across Europe calling for “topless jihad.” While American feminists today are satisfied whipping up outrage about Mitt Romney’s binders and Sandra Fluke’s right to bill taxpayers for her birth control, Femen’s Amazonian warriors dive right in to do battle in a real War on Women being openly waged by Muslim misogynists. Topless jihad – it puts a whole new spin on #MyJihad.

The protests in Sweden, Italy, Ukraine, Belgium, and France [here are images from the demonstrations; warning – most contain nudity and/or offensive language] were in solidarity with a gutsy young Tunisian activist named Amina Tyler, who recently shocked Islamic sensibilities by posting naked images of herself online, with the words “I own my body; it’s not the source of anyone’s honor” penned on her bare chest.

The head of Tunisia’s Orwellian-titled Commission for the Promotion of Virtue and Prevention of Vice responded to this provocation as you might expect from a violent totalitarian, calling for Tyler to be stoned to death lest her obscene actions lead to an epidemic of Muslim women casting off not just their burqas and blouses but their oppression as well.

Her family wasn’t especially supportive either. According to The Atlantic, They kidnapped her, beat her, and held her in captivity for three weeks, during which time she was drugged, subjected to an amateur virginity test, forced to read the Quran, and taken on involuntary visits to imams. Her aunt posted a video online in which she called Amina “mentally ill,” “unbalanced,” and “psychopathic” for her “shameful act” which had injured her father’s “pride as a man.” A week after the topless jihad, Amina managed to escape and is now hiding somewhere in Tunisia.

The courageous response of Western feminist organizations? A search of the National Organization for Women’s website for a statement about Tyler from the preeminent feminist group turned up zero results.  So it was left to her sisters at Femen to lead the pushback with small but riotous demonstrations in which shouting young women ran amuck in public wearing little else but grammatically awkward slogans like “Bare breast against Islamism,” “There will be millions Amina’s,” “Arab women against Islamism,” “No Sharia,” “F*** Islamism,” and the most common, “F*** your morals.” Femen activists even burned a Salafist flag in front of the Great Mosque of Paris. If only Western feminists had half their bold determination to stand against totalitarianism.

Make no mistake, Femen is not your mother’s feminism, all political correctness and academic pontification. They aren’t even your grandmother’s bra-burning feminism. Here is their own description, imperfect English and all:

FEMEN is the name of the scandal famous organization of topless women activists, who defend with their breast sexual and social equality in the world. Activists of FEMEN are morally and physically fit soldiers, who every day make civil actions of the high degree of difficulty and provocativity.

FEMEN is the new Amazons, capable to undermine the foundations of the patriarchal world by their intellect, sex, agility, make disorder, bring neurosis and panic to the men’s world…

FEMEN is a hot boobs, a cool head and clean hands. Be FEMEN means to mobilize every cell of your body on a relentless struggle against centuries of slavery of women!

FEMEN is an ideology of SEXTREMISM… of the women’s sexual protest presented by extreme topless campaigns of direct action… serving to protect women’s rights, democracy watchdogs attacking patriarchy, in all its forms: the dictatorship, the church, the sex industry.

They don’t limit their protests to Islam. Like their partners-in-spirit Pussy Riot, the Russian punk rock group, Femen activists have targeted Christians too by disrupting the Pope’s sermon in St. Peter’s Square, attacking the Orthodox “Patriarch of Moscow and all Russia,” and cutting down a crucifix in Kyiv.

But attacking Christians is easy and even culturally acceptable, as genocidal Muslims and Western leftists well know. Where Femen really excels, displays impressive balls, and deserves serious respect, is in their fearlessness toward Islamic fundamentalism – a fearlessness lacking in emasculated Western authorities.

The aforementioned piece in The Atlantic, which was surprisingly supportive of Femen’s confrontation of Islam, reported on a recent debate between Femen leader Inna Shevchenko and Arab-American Muslim blogger Laila Alawa, who claimed to be a feminist, about women, Islam, and the hijab. Shevchenko stunned her opponent and the moderator by noting that the only reason Femen was discussing Islam at all is the “blood, fear, and dead women’s bodies” to which it has led. Even Alawa did not deny it. Femen’s problem with Muslim headscarves, Shevchenko said, centered on whether wearing them was voluntary:

It symbolizes blood and all the crimes that are based on your religion, even if you don’t support them… If you’re a feminist, if you’re for liberation, then be brave [enough] to say that we are against that and take off your scarf until the moment that your scarf will not be a symbol of crime.

The moderator accused her of insensitivity and Alawa, rocked on her heels, tried to defend her choice. Shevchenko urged Alawa to take off the headscarf “until the moment when it will not be a symbol of the death of your sisters.” Imagine an American “feminist” taking such a bold stance in the media. “We demand human rights for all women, for Arab women and American women,” Shevchenko told the Atlantic writer a few days after the debate. “The idea of a Muslim feminist is oxymoronic.”

Femen’s in-your-face campaign in defense of Amina is in stark, positive contrast with the West’s usual timid and hypocritical acquiescence of the abuse of women under Islamic oppression. This is how human rights are won and preserved – not by tolerance and “dialogue,” but by fighting for them.