Kyiv, Jan 20: Four FEMEN activists staged a topless protest on the balcony of  the Indian embassy  here on Wednesday  in protest against Indian government's  plan to block young Ukrainian, Russian and Kazakh women from entering India as part of a national anti-prostitution campaign.

The topless activists, partially clad in Indian clothes, used a ladder to climb the Indian embassy’s balcony and unfurled banners saying "Ukrainians are not prostitutes!", "Delhi, close your brothels," and "We demand apologies."

The protesters waved Indian flags and knocked on the embassy’s doors and windows – until detained by security guards and taken away by the police.

The demo was sparked after the Indian Ministry of Foreign Affairs ordered its embassies to take extra care checking visa applications from women aged 15-40, who are blamed for the country’s prostitution boom. 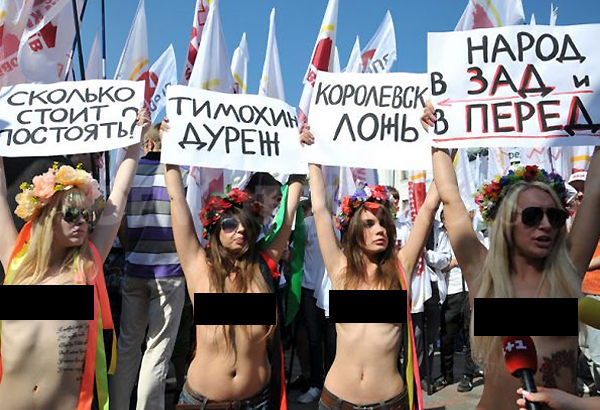 FEMEN’s blog says that by issuing such an order, India has gravely insulted the women of Ukraine, Russia and Kazakhstan.

"Indian prostitution is directly connected with impunity of the country’s criminal business," the blog states. "Blaming it on women is a shame for the heirs of such a rich and old culture."

The FEMEN movement made its name by carrying out politically-motivated naked protests at home in Ukraine and in countries throughout Europe, including the Vatican.

The activists regularly protest against such issues as the sexual exploitation of women, "patriarchal propaganda of sex inequality," and restrictions on abortions. They also supported a sexual assault cases against former IMF head Dominique Strass-Kahn and former Italian PM Silvio Berlusconi.

Not all of their demonstrations ended peacefully. In December 2011, three Ukrainian FEMEN activists protesting in Minsk against Belarus’ long-ruling president were kidnapped by Belarusian KGB officers. The protesters said the officers threatened them with knives, cut their hair and then left the women alone and naked in the woods.

On January 16, Ukraine’s Ministry of Justice refused to register FEMEN as an official political movement, claiming its position was extremist.