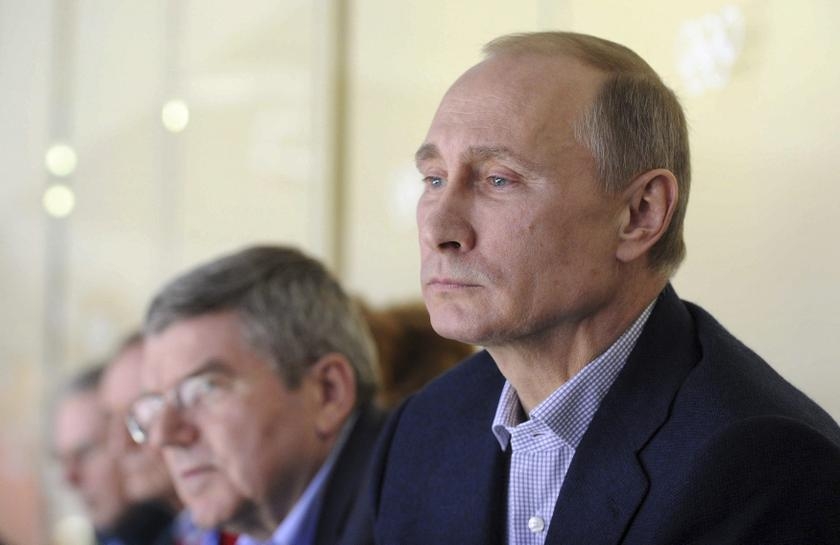 Russia's President Vladimir Putin (right) watches the men's preliminary round ice hockey game between Russia and the US at the Sochi 2014 Winter Olympic Games February 15, 2014. Pic: ReutersMILAN: Topless Femen activists poured buckets of wine over their naked breasts in front of Milan’s cathedral today, in the latest of the women’s rights group’s signature protests.

The stunt, witnessed by a handful of bemused commuters on a chilly morning, came ahead of Russian President Vladimir Putin’s arrival in the Italian city for an ASEM summit of European and Asian leaders.

Femen leader Inna Shevchenko was one of the two women performing what looked like a version of the ice-bucket challenge for the benefit of a gaggle of photographers and video crews.

With the slogan “ASEM allies of Putin” emblazoned across her naked torso, she said the wine was intended to symbolise the blood being spilled in her native Ukraine as a result of Russian meddling in the country.

“We believe that welcoming a killer, a person who is killing a whole nation right now — and this Ukrainian blood is right here, is on us — and shaking his hand, is ignoring the big torture, the big killing and the war in Ukraine that is started and supported by Putin,” Shevchenko told AFPTV.

Putin was due to arrive in Milan later today for a summit overshadowed by his presence and efforts to resolve the crisis in Ukraine.

Putin is scheduled to meet his Ukrainian counterpart Petro Porochenko for breakfast talks on Friday morning.