Please madam, not in front of the psychic pig!

Funtik the Psychic Pig was getting ready to make his Euro 2012 soccer prediction in Kyiv on Wednesday when the Femen women’s rights group staged a topless protest in his pen, disrupting the entire thing. How dare they make a mockery of the psychic pig soccer prediction?

Funtik is daily given two bowls to eat from, each marked by the national flag of two teams playing each other at the finals. Those who have faith in his psychic powers say the bowl he eats from first will prove to be the winner on the night.

But even before a fan zone steward could bring in his food — a bowlful each for Portugal and the Czech Republic who clash in Warsaw today — an activist for Femen barged into the pen.

Olexandra Nemchinova, 31, following the pattern of previous Femen bare-breast protests, threw off her blouse to reveal the words ‘F*** Euro 2012′ on her torso and began shouting slogans denouncing the tournament being co-hosted by Ukraine and Poland.

Stewards hustles Nemchinova out of the pen and handed her over to the local police.

Femen’s agenda is to protest the sex industry that has allegedly grown around Euro 2012 venues in Poland and the Ukraine. The woman who broke into the pig pen had the No. 10 written on her back, along with the name of UEFA president Michel Platini. Femen later issued a statement declaring the demonstration a birthday ‘gift’ to Platini, who turned 57 today.

The statement said Kyiv’s fan zone, where hundreds drink beer and watch Euro 2012 matches on big screens, were nothing more than “a cattle pen for deceived fans who are seduced by swill in the form of beer and mindless entertainment.”

Why am I not there?

Femen activists have made two attempts to seize the tournament’s Henri Delaunay trophy when it was on public display in various towns around Ukraine prior to the tournament.

Funtik, the pig, seemed unperturbed by the uproar going on around him on Thursday.

He sniffed Nemchinova’s blouse and later dived into his bowls of food, demolishing both of them in short order.

For the record, he picked Portugal. 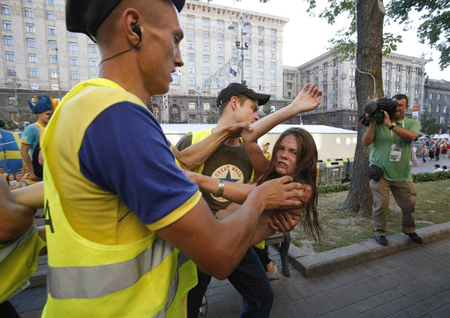