KYIV, Ukraine — A bare-breasted feminist activist bearing a threatening message on her body tried to attack the Russian Orthodox Church’s leader Thursday to protest alleged anti-Ukrainian policies by the church and the Kremlin.

The protester with the controversial Ukrainian women’s rights movement Femen managed to get a meter (yard) within Patriarch Kirill at Kyiv’s airport, but was stopped by a security guard and a priest.

The woman, identified by Femen as Yana Zhdanova, had the words “Kill Kirill” written on her back in large black letters and shouted a phrase from a religious ritual that aims to expel demons, roughly translated as “Kirill, go to hell.”

Police said the activist was being held at the airport and will soon be taken to court, where she may face a fine or several days in custody.

The commotion highlighted the tension between Moscow and Kyiv as Ukraine tries to move out of Russia’s shadow politically, economically and spiritually. 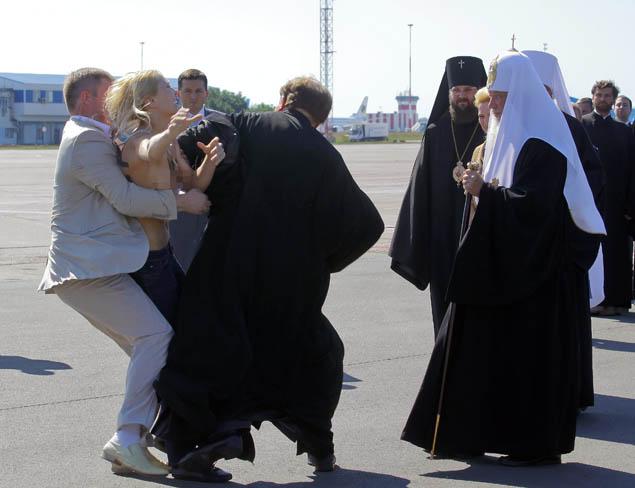 Ukraine’s main Orthodox Church still answers to Kirill’s Moscow Patriarchate, and two smaller but increasingly popular independent churches are not recognized by world’s Orthodox leaders. But there is a growing movement to create a strong, unified Ukrainian Orthodox church that would be Moscow’s equal.

The incident also underlined the relative freedom and democracy of Ukrainian society compared to Russia, where three members of the feminist rock band Pussy Riot have spent months in prison and face up to 7 years in jail for performing a “punk prayer” against Russian President Vladimir Putin from a pulpit of Moscow’s main cathedral.

A spokesman for the Ukrainian Orthodox Church said it will not press charges against Zhdanova.

“The girl has been shamed and lectured and I think this is quite enough,” church spokesman Vasily Anisimov told The Associated Press. “If we put a policeman next to every sin ... what will our life become?”

Kirill did not react to the incident, proceeding to talk about his visit to a group of reporters. He is in Ukraine on an annual worshipping trip.

Femen has gained prominence for staging topless protests against all kinds of political and social problems — from the shortage of hot water to women’s rights in the Muslim world to domestic pension reforms. But critics say Femen members are more interested in self-promotion than real reform, and that their antics are often tacky and undermine the cause of their protests. 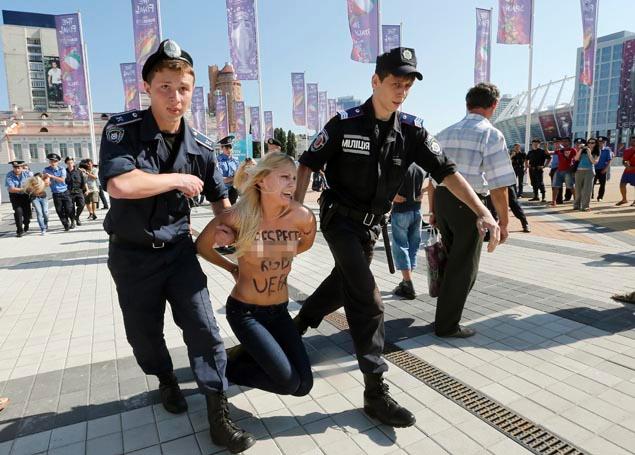 At an earlier protest in front of the Olympic Stadium in Kyiv, Ukraine on July 1, 2012, Ukrainian policemen arrest activists of the Ukrainian feminist group FEMEN. FEMEN activists had undressed in public to protest against possible arrival of Belarusian President Aleksandr Lukashenko for final game Italy vs Spain, and a rise in prostitution during the UEFA EURO 2012 soccer championship in Ukraine. 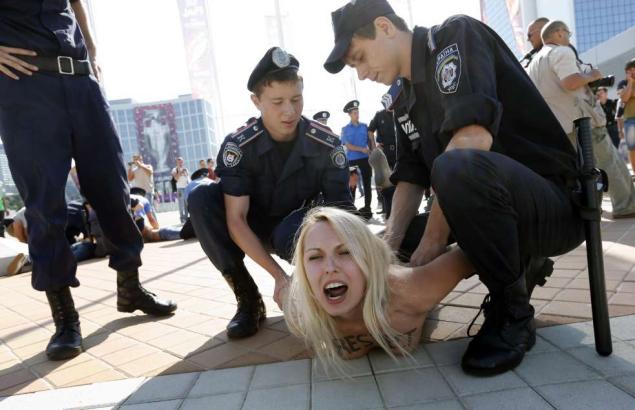 Ukrainian policemen arrest activists of the Ukrainian feminist group FEMEN during their protest in front of the Olympic stadium in Kyiv, Ukraine, 01 July 2012. FEMEN activists had undressed in public to protest against possible arrival of Belarusian President Aleksandr Lukashenko for final game Italy vs Spain, and a rise in prostitution during the UEFA EURO 2012 soccer championship in Ukraine. 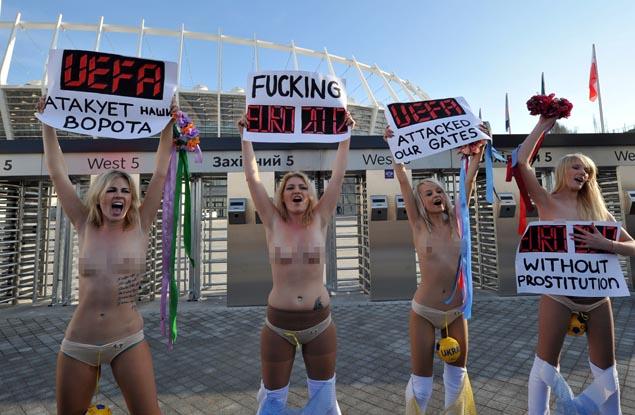 Activists of Ukrainian women movement FEMEN hold placards reading "EURO-2012 without prostitution", "UEFA attacked our gates" and others during a protest in front of the Olimpisky Stadium in Kyiv, a few hours prior the UEFA EURO-2012 Final Draw ceremony on December 2, 2011.