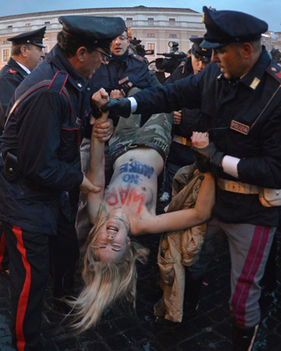 TOPLESS protestors have been dragged away by police, just yards away from where cardinals are attempting to choose a new Pope.

The demonstration, staged by Ukrainian feminist group Femen, took place in St Peter's Square on the first day of the papal conclave yesterday.

Demanding the ordination of female priests, the protest was quickly disrupted by cops as they bundled the women away from the scene.

Earlier in the day, other Femen members had let off a pink flare on a hill above the Vatican.

Mirroring the conclave's use of black and white smoke to signal whether a new pope has been chosen, the protestors used the stunt to call for a greater role for women in the Catholic Church.

Vatican police are on alert for more protests today, as basketball star Dennis Rodman has promised to enter St Peter's Square in a makeshift popemobile to campaign for the election of Ghana's Cardinal Peter Turkson as the first ever black pope. 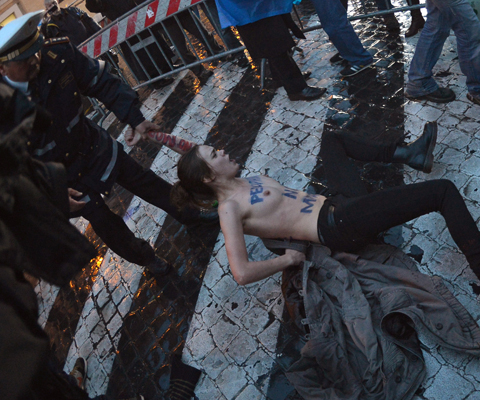 The demonstration was staged by Ukrainian feminist group Femen

Email To A Friend