The thousands of people who had come to St. Peter’s Square to get a glimpse of the Pope got more than they bargained for – a topless woman, an attempted theft, and an arrest. The topless woman was arrested by the Vatican police on Christmas Day reported Reuters on December 26, 2014. 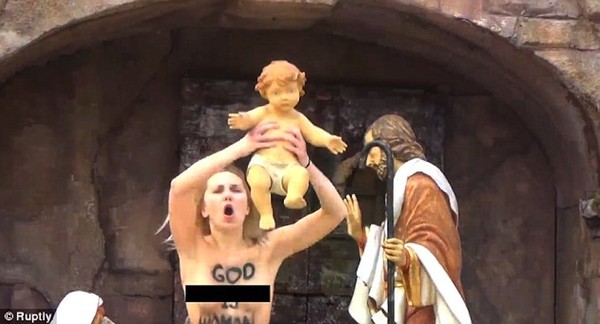 An hour after Pope Francis finished his Christmas greeting, a bare chested Iana Aleksandrovna Azhdanova, a Ukrainian citizen, rushed the nativity scene at St. Peter’s Square, snatched the baby Jesus statue from his manger, ran off shouting anti-religious rhetoric. Azhdanova’s chest was adorned with the message “God Is Woman” reported the Guardian on December 26, 2014.

Azhdanova was quickly apprehended by a member of the Gendarmerie Corps of Vatican City State, the Vatican’s guards, given a cape to cover herself, and turned over to Vatican police. Azhdanova is charged with vilification of religion, obscene acts in public, and theft.

Vatican spokesman Father Federico Lombardi said Azhdanova’s actions were deeply offensive. And the Vatican had not choice but to arrest Azhdanova.

Azhdanova is a member of a Femen, an extreme women’s rights group that was founded in Ukraine, but is now based in Paris, France. Femen stated the protest to speak out against organized religions’ “maniacal desire to control women’s fertility.” Femen have protested at the Vatican in the past but this was the first arrest at a Femen protest at the Vatican.