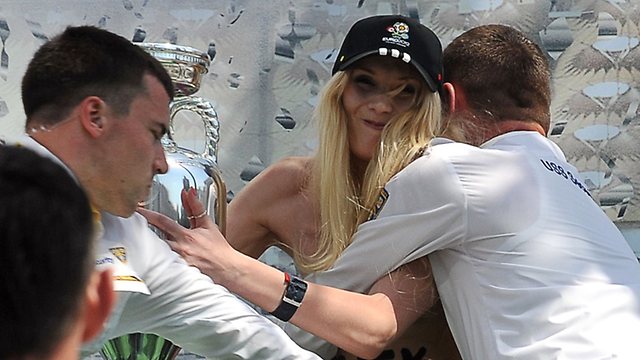 A topless Ukrainian woman attacked the trophy to be awarded at the upcoming Euro 2012 soccer tournament, knocking the silverware to the ground during an exhibition in Kyiv.

The woman ran toward the Henri Delaunay trophy, then exposed an obscene slogan protesting against the tournament written on her torso.

She was quickly detained by police, the Ria Novosti news agency reported.

The FEMEN protest group - a feminist organisation campaigning to end sexism and sex tourism in the Ukraine -- regularly disrupts sporting and other public events in the country.

Following the protest, the group said on its Twitter page that it hoped to highlight how theEuro 2012 event would increase prostitution in the Ukraine.

"Femen is opposed to the hosting of Euro 2012 in Ukraine and accuses UEFA of propaganda for sex tourism, of stimulating sex-tourism in the cities where the Euro tournament will be held, of debilitating the population and making it drunk," the group said.

The Ukraine and Poland will host the Euro 2012 tournament from June 8 through to July 1.