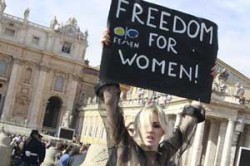 Topless women from the Ukrain gathered under the Pope's balcony at the Vatican to protest what they say is the Catholic Church’s misogyny.

The rally on Sunday, November 6, 2011, was arranged by activists of the Ukrainian Femen women's rights movement.

Shevchenko waved a banner, which stated “Freedom for Women,” as she shouted what sounded like “Libre! Libre…” and tore off her see-through top under the Vatican.  She was surrounded by police and detained.

The protest condemned the Pope’s stance against contraception and other oppressive dogmas against women.

“Condemning the usage of contraceptives, worldwide anti-abortion lobby, attempts to restrict the attire and the appearance of women, and prohibition from acquiring church ranks is nothing more than a foul-smelling belch of the witch hunt,” the statement said.

An RT news clip reports that the activists are angry at the Pope’s condemnation of abortion and the use of contraception.  The group protests against the anti-feminist policies of the Vatican that “impose patriarchal medieval concepts of social and cultural positioning of women”.

Auto-Generated Related Posts (Use the Search for Better Results)