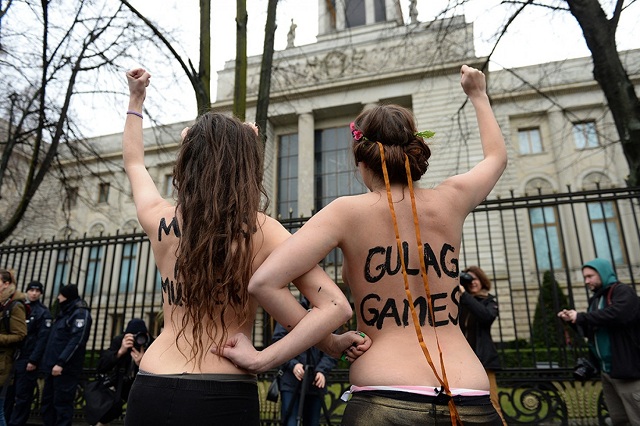 Members of a feminist protest group known for storming events topless has disrupted an Islamic conference in France and caught what appears to be a bit of a beating in the process.

Femen, founded in Ukraine, doesn’t have a huge reputation stateside. The group, the subject of a 2014 documentary, is known for its advocacy on behalf of Ukranian rape victims and ambushing Russian President Vladimir Putin — news that isn’t always news on the other side of the Atlantic.

But the group’s provocative tactic — as the group’s Facebook page puts it: “Our God is a Woman! Our Mission is Protest! Our Weapon are bare breasts!” — keeps the group in the headlines from time to time.

Even right-wing media sites like Breitbart were impressed when two young women, sans shirts, took the stage last weekend at what was billed as a

“Muslim salon” in Pontoise, France, a town just outside of Paris. The salon, as Buzzfeed reported, included a conversation about “Women’s valuation in Islam.”

In dramatic video that’s not exactly safe for work, the women take the lectern and start shouting in French: “Nobody enslaves me, nobody owns me,

I’m my own prophet.” Messages written on their chests — a Femen trademark — offered similar messages. “The two activists (both coming from Muslim families) [gave voice to] hundreds of women, feminists, and associations, all disgusted by this public hate speeches,” the group wrote on Facebook. “It was our duty to interrupt this enslavement event, and to let a scream of freedom be heard in the middle of their submission lessons.”

The women were quickly escorted offstage. But the escorting seemed to turn into a scuffle as a number of men began kicking the women once they were down.

A reporter for Buzzfeed France present at the event told The Washington Post that, at the time the women took the stage, the imams they interrupted were actually taking a moderate tone. — AP