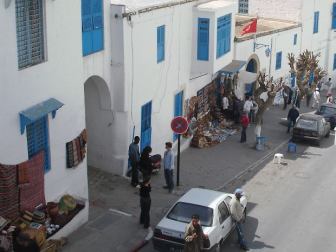 Three “Femen” activists staged a topless protest in downtown Tunis, a day before the trial of Tunisian feminist Amina.

She was arrested May 19th in Kairouan after she allegedly wrote the word Femen on a wall near a graveyard. She could face up to five years in prison if convicted, according to her lawyer Souheib Bahri.

During the Wednesday protest in her support, three European activists – two French and one German – chanted “Free Amina” with the slogan “breast feed revolution” scrawled across their topless bodies.

People in the crowd outside the courthouse where the demonstration took place attempted to cover up the women before police arrived on the scene.

An investigation will be opened into the foreign activists, according to a statement from the prosecutor at the Tunis Court of First Instance. Acts of indecency can be punished by at least six months in prison under Tunisian law.

However, Femen’s leader in Paris, Inna Shevchenko, told AFP that her group did not care whether Tunisian law punished any attack on public morals.

“We don’t take any notice of this kind of thing. In these countries the law is applied as it suits (those in power). In Tunisia, we see that people run the risk of two years in prison just for simple graffiti,” she said.

She noted that it is the first action to be taken by her group in the Arab world and that three activists were prepared in Paris before they were sent to Tunisia on Tuesday.

“These countries and these totalitarian regimes prey on women,” Shevchenko said.

The Femen movement was founded in Ukraine but is now based in Paris. For years, the group has organised topless protests across the world in defence of women’s rights.

But the activists’ latest protest angered many Tunisian citizens, who stressed the need to apply the law to put an end to immoral acts.

The religious affairs ministry condemned the action in a statement issued Wednesday and described it as a mean act that provoked people’s feelings and violated the teachings of Islam and the values of the Muslim people of Tunisia.

“What a disgusting way of protest,” Mondher Bettaibi, 35, an employee, said. “This is an eccentric, provocative act that we can’t accept. The law must be applied on those activists, whether foreigners or Tunisians, so they receive their punishment for what they did against a conservative Muslim society.”

In her turn, Nessrine Thabet, 22, a student majoring in finance, said, “In spite of the immoral act that the Femen group committed in Tunis today, I think that Tunisian women will remain a symbol of morals and chastity with their own way of protests to defend their rights. Therefore, they don’t need the support of such groups.”

But Amina’s father Mounir Sboui said before the trial began that he was “proud” of his daughter for her ideological commitment.

“This case is getting more and more politicised. Her actions were excessive but she defends her ideas,” he added.