Celebration of International Women's Day in Turkey is overshadowed by the news that so far this year, one woman was killed nearly every day in Turkey as a result of domestic violence. The government on Thursday passed legislation to combat abuse directed against women, but concerns remain about the implementation of the reforms.

In the heart of Istanbul, semi-naked women covered in artificial blood protested against domestic violence to mark International Women's Day. The demonstrators, members of the Ukraine-based women's rights group Femen, were quickly arrested. Turkish women took part in other more low-key demonstrations across the city.

A report this week revealed that in 2012, one woman in Turkey has died nearly every day as a result of domestic violence. International Women's Day was no exception - a divorced woman was shot dead in Istanbul, allegedly by a relative of her divorced husband.

A study on domestic violence by the Turkish-based International Strategic Research Organization reveals a disturbing picture. One of the report's authors is Dilek Karal.

"Forty-two percent in Turkey have been subject to physical or sexual violence, and also official statistics reveal that 90 percent have not reported cases of abuse," she said. "One of the reasons is cultural perception. People think that is a shame to denounce domestic violence in public. And also the second reason, previous experience incidents show authorities do not react to this violence. So they think that police will not do anything about the domestic violence and also the lawmakers cannot do anything [about] this domestic violence." 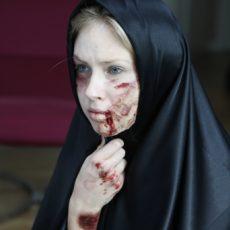 An activist of the women's rights group Femen prepares for a protest against domestic violence in Istanbul, March 8, 2012.Turkey's ruling AK party has pledged to deal with the problem. But under its 10-year rule, according to its own statistics, murders of women have increased 1,400 percent in seven years, with nearly 1,000 killed in 2009.

Minister of Family Affairs Fatma Sahin introduced legislation that was passed by parliament Thursday. The new law is aimed at offering better protection to women and enhanced support for victims. The legislation widens the scope of protection. Up until now, Turkey's domestic violence law has only applied to married women. Pinar Ilkaracan of Women for Women's Human Rights cooperated with the ministry on drafting the legislation. She says there are some important changes.

The new law, which still has to be ratified by the president, also provides for courts to electronically tag men deemed to be a threat.

But controversy has surrounded the new reforms, with women's groups and other non-governmental organizations angered by changes already made to the new law. Ilkaracan says the legislation has been weakened.

"The draft, which was prepared by the ministry and women's organizations, was cancelled by other institutions, for example, in the last case by the prime ministry," she said. "A very striking example, wherever there was a term 'gender equality,' or 'women's human rights,' all these were deleted. The paragraph to give the ministry authorization to train the police or to establish violence intervention centers [was] deleted. Now the law has become half-good, bittersweet. For me, it signals the government is not serious about eliminating violence against women."

Minister of Family Affairs Sahin acknowledges the concerns and criticisms but argues it remains an important reform.

She says this is a strong law and Turkey is entering into a new system that defends a woman's right to live and protects victims of violence.

There also are concerns about whether the necessary infrastructure will be created to support victims of abuse. Turkey currently has around 70 shelters for a population of more than 80 million. Germany, with an equivalent population, has 366. The budget for provision of such services has been cut nearly in half in a last-minute amendment to the law.

"There is a credibility gap," van Gulik said. "On one hand, you have this amazing progress in terms of legislation, so you have the penal code reform, the civil code reform. They have set this system of protection in principle, in law. On the other hand, none of that is implemented properly."

Protection of women's rights remains a key part of the European Union, which Turkey is seeking to join. The government has committed itself to confronting domestic abuse, but critics argue there is a worrying gap between its rhetoric and implementation of the reforms.