The de facto authorities in Crimea have announced that they consider the territory to be part of Russia after a swift vote in the local parliament.

The MPs said on Thursday morning that a referendum planned for 30 March – which was due to ask voters if they wanted more autonomy from Kyiv – would now take place on 16 March, ask whether they wanted to join Russia, and only be a ratification of a decision that had already been taken.

The parliament also appealed to Moscow to assist its decision to seek union with Russia.

The bombshell announcement coincided with an emergency EU summit in Brussels devoted to Ukraine. Senior EU officials denounced the idea as "completely illegal" while British officials said they would take their cue from the interim Ukrainian government, which deems the referendum anti-constitutional. 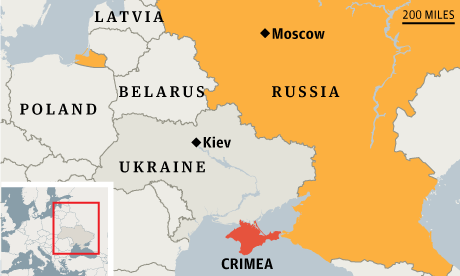 "This is an illegitimate decision. This so-called referendum has no legal grounds at all. Crimea was, is and will be an integral part of Ukraine.

"In case of further escalation and military intervention into Ukraininan territory by foreign forces, the Ukrainian government and military will act in accordance with the constitution and laws."

In Moscow, Russian MP Sergei Mironov said the Duma, Russia's parliament, could consider the appeal from Crimea as early as next week. The Duma has already begun work on a bill that would make it easier for new territories to join Russia, clearly penned with one eye on events in Crimea. On Tuesday, the Russian president, Vladimir Putin, had said categorically that Russia was "not considering" joining Crimea to Russia.

At a press conference in the Crimean capital Simferopol, the deputy prime minister of the region, Rustam Temirgaliev, said the parliament voted by 78 votes to 0, with eight abstentions, to hold the referendum on 16 March. He said the decision, which also gave the go-ahead to the territory to begin preparations to join Russia, "comes into effect from the current moment". The referendum would be held "only to confirm" the decision.

Temirgaliev said that as of Thursday, the only legal troops on Crimean soil were the Russian army.

"Any troops of a third country will be treated as illegal band formations, with all the consequences that entails," he said.

Shortly after this decision was announced, the Organisation for Security and Co-operation in Europe confirmed that an observer mission of more than 30, dispatched to defuse the situation in the peninsula, had been "prevented from entering Crimean territory".

Ukraine has a number of military bases in Crimea that have come under siege from armed local volunteers and the Russian army in recent days. Russia has denied its troops are involved in the region despite widespread evidence to the contrary. Ukrainian soldiers in the bases have come under pressure to defect to Russian or Crimean forces, but have mainly not done so.

With events moving quickly on the ground, the big question is whether the officer class starts to defect en masse, and whether Russia uses force if they do not.

In Kyiv, Ukraine's economy minister, Pavlo Sheremeta, said the referendum would be illegitimate, but in Simferopol, politicians said the referendum was now only a formality. Crimea has a large pro-Russian population, though many want more autonomy rather than actual union with Russia.

The Kremlin's final goal in Crimea has been murky, with many analysts suggesting that Putin would be satisfied with more autonomy or de facto independence for the region, but Thursday's events appear to suggest that the decision has been taken to annex the region.

"We have a group of Russian specialists here working on introducing the Russian rouble to the region," said Temirgaliev. He added that all Ukrainian state property in the region would be nationalised.

Outside the parliament building in Simferopol, a group of about 100 people waved Russian flags and chanted as the Russian national anthem was played, as well as a new "Crimean anthem" that begins: "The island of Crimea is fighting for freedom" and continues with scornful words about "fascist bands" in Kyiv and their western backers.

The proceedings were interrupted by two topless demonstrators from the protest group Femen, who charged the stage with "Stop Putin's War" written on their torsos. They were beaten and screamed at by a crowd of elderly women before being dragged off by Cossack irregulars and taken away in a police van.