Kyiv (dpa) - A member of a Ukrainian feminist group stripped to the waist and attacked the trophy for the Euro 2012 football championship on Saturday, before security carried her off. 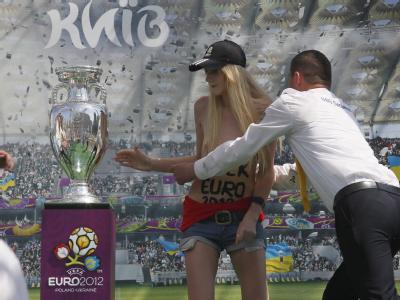 The incident took place in Kyiv's central Independence Square, where the trophy for the European football championship was on display.

The woman, a member of the shock protest group Femen, had "Fuck Euro-2012" painted on her torso.

News reports identified her as Yulia Kovachik, 23. She was able to knock the trophy off its display stand before police detained her seconds later, a witness said.

She was arrested and police carried her from the scene rolled up in a Euro 2012 advertising banner. The trophy was slightly damaged, a group spokeswoman said.

The group Femen has been outspoken in its opposition to Ukraine's co-hosting of Euro 2012, arguing that the sports event will increase prostitution in the country.

Government officials have said they expect the championship - the first major football tournament ever to be played in the former Soviet republic - to be good for the economy and improve Ukraine's international reputation.

Poland is the other co-host of Euro 2012. The Ukrainian capital Kyiv is scheduled to be the site of the final game in the tournment, to be played on July 1. dpa sbk hm Author: Stefan Korshak