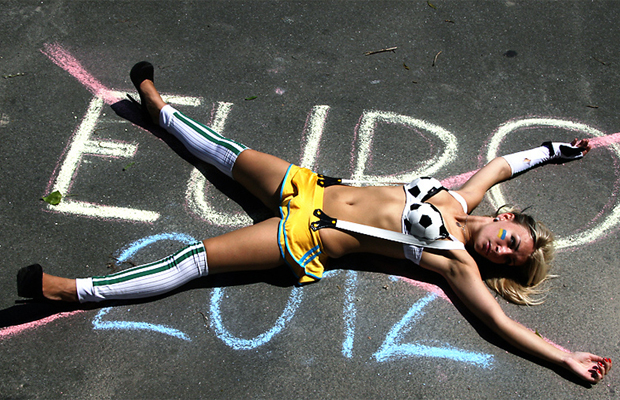 London: Women activists in Ukraine protested naked to oppose prostitution and sex tourism ahead of the country’s staging of the Euro 2012 football tournament next summer.

Five of them took advantage of rising international interest in Kyiv and peeled off in the capital, waving placards bearing the words “Euro 2012 without prostitution” and “****ing Euro 2012”.

The demonstrators, known as FEMEN were confronted by cops before being dragged off outside the city’s Olympic stadium.

Spokeswoman Inna Shevchenko claimed that UEFA were encouraging the Ukrainian government to legalise prostitution during the contest which begins in June.

“We understood that classic feminism no longer works,” the Sun quoted Shevchenko as saying.

“It is, if you excuse me, impotent.

“But what we do brings the desired effect. That’s why not only Ukraine needs us, but Europe as well.

“We are planning to take over the world,” she added.

The group also believes the beauty industry is a form of prostitution.