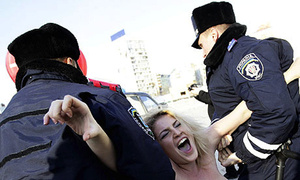 Makes sense to everyone, right? The group, Femen ("Femen has established an international reputation for staging semi-naked protests in Ukraine and abroad."), held the naked demonstration outside Kyiv's Olympic Stadium. They claim that UEFA is attempting to legalize prostitution during the 2012 European Championship.

"A Femen spokeswoman, Inna Shevchenko, said Uefa was 'trying to influence our government' to legalise prostitution during the tournament, which will take place in June and July next summer."

Here's a some [sic'd] elaboration:

Femen repeatedly appealed to both UEFA and Ukrainian government to create a social program devoted to the problem of sex tourism and prostitution in Ukraine; to inform football fans that prostitution is illegal in Ukraine; and to develop visual decisions and slogan for the Euro 2012 final match to fight against prostitution and sex tourism. The group even crated their own Euro 2012 mascots, Blyadek and Blyadko, who simply "love sex, football and beer".

In the end, the women took off their clothes, made some noise and five minutes later it was all over. "The protest lasted only enough for reporters to take photos and videos as the women, who adorned their underwear with miniature footballs and wore toilet paper around their shins, were very quickly dragged away from the spot by the police."