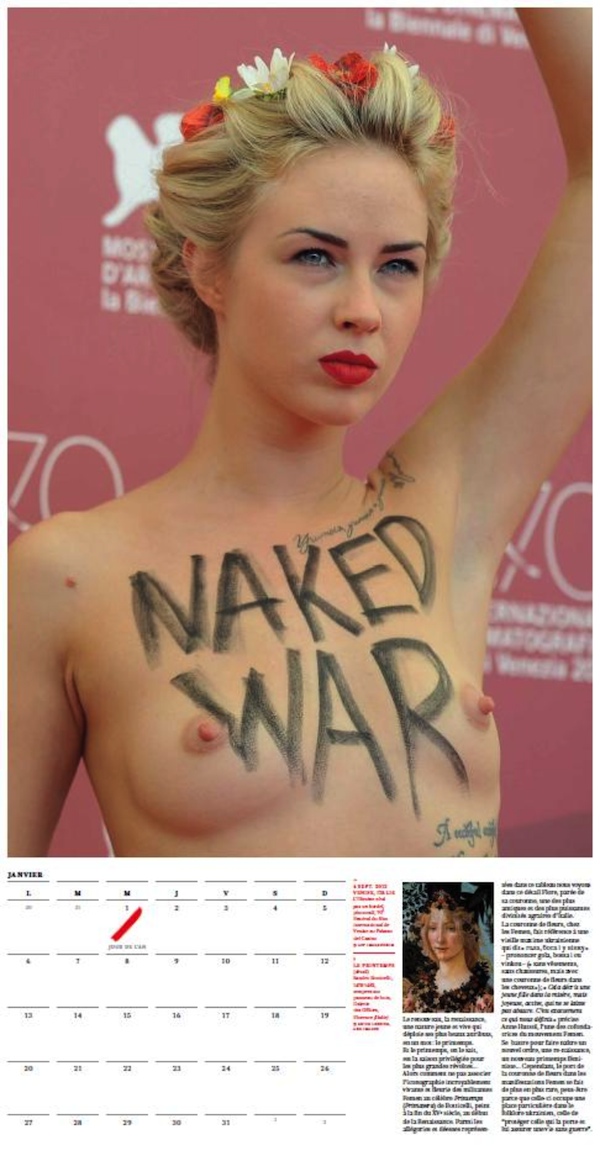 The Ukraine-founded, Paris-based feminist activist collective FEMEN, known for staging topless protests wherever women’s rights are being threatened, might want to stage a protest over this one: Without the group’s permission, newly founded French publisher Le Contrepoint has created a 2014 wall calendar combining Agence France Presse photographs of FEMEN protesters and famous works from art history. Each month’s pairing comes with explanatory text by Julien Blanpied, assistant curator at the Musée d’Art Contemporain du Val-de-Marne, noting the similarities between the seminal artworks and the images of the feminist artist-activists, Libération reports.

“Beyond the many conflicts and contradictions relayed by the media, a specific iconography has emerged from the spectacular interventions staged by these bare-breasted militants, the echo of which resonates far into the sacred field of art history,” the publisher explains in a statement about the “Femen 2014″calendar, which will mark Le Contrepoint’s launch and retail for €15.90 ($21.39) when it is released on Thursday.

So, for instance, on the spread for April 2014, FEMEN co-founder Oksana Chatchko is shown in an AFP photograph being carried away from a protest outside the Tunisian embassy in Paris by two police officers. Blanpied likens this image to Charles le Brun’s “Descent From the Cross,” finding improbable religious symbolism in the FEMEN photo. “In spite of these militant women’s wishes,” the curator writes, “photographers charged with covering these events have sometimes captured troubling scenes in which Christian culture carves itself an improbable passage.” Improbable indeed.

This entry was posted
on at and is filed under .
You can follow any responses to this entry through the feed.

You can leave a comment, or trackback from your own site.

Responses are currently closed, but you can trackback from your own site.

You can skip to the end and leave a response. Pinging is currently not allowed.

Both comments and pings are currently closed.