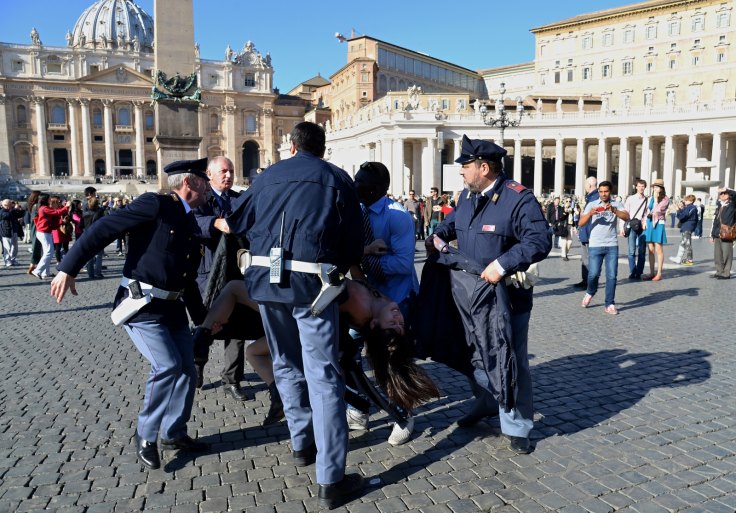 A member of women's rights group Femen was arrested by the Vatican for exposing her breasts and snatching a statue of the Baby Jesus.

She reportedly grabbed the statue about an hour after Pope Francis offered his Christmas blessing.

The incident happened in front of thousands of Roman Catholic worshippers at St Peter's Square in Rome. The feminist protester was detained for "disturbing the peace, obscene acts in a public place, and theft".

But in an act of clemency, the Holy See prosecutor met with Yana Zhdanova and decided to free her, according to Vatican spokesman the Reverend Federico Lombardi.

However, her protest "must be regarded as extremely serious due to the setting and circumstances that intentionally offend the religious sentiments of a very large number of people," said Lombardi.

The Ukrainian activist was also instructed to never set foot in the Vatican City State again.

Zhdanova yelled: "God is woman" when she bared her breasts in the Holy See. She also reportedly had this written across her chest.

This is the latest in a series of protests by the Ukrainian women's rights movement Femen targeted at the Vatican in recent years, demanding rights for women and gays, as well as protesting in favour of abortion. This is the first time any of the activists have been arrested by the Vatican.

Zhdanova has taken part in public protests previously. During the Euro 2012 football tournament in the Ukrainian town of Lviv, she grabbed the trophy and pulled down her dress, displaying "F**k Euro 2012".

The Kyiv-based feminist group were protesting that the football tournament would lead to a rise in prostitution in Ukraine, making it a destination for sex tourism.

"We needed to tear down this trophy to show that this phallic symbol does not need to stand on a pedestal, when our country is being turned into a brothel. Uefa have arranged this with our politicians in order to win back the money that has been put into the Euro 2012" said sister Femen activist Oleksandra Shevchenko.