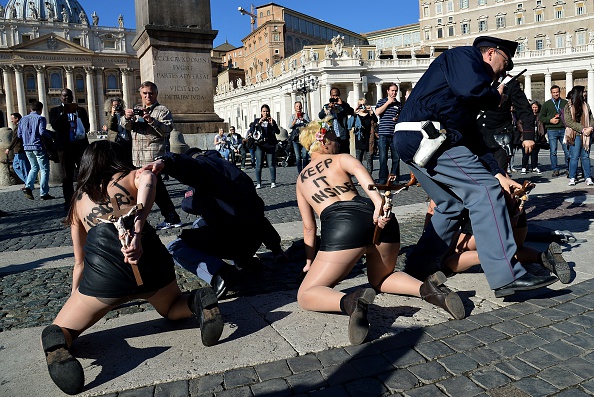 The women crouched on all fours and re-enacted sex with crosses while shouting anti-papal remarks including "a world without religion, a parliament without a pope" and "god is not a magician, pope is not a politician".

It is thought the women, who had "the pope is not a politician" daubed across their breasts, were protesting against Pope Francis' planned visit to the European Parliament in Strasbourg on November 25.

Witnesses in St. Peter's Square stood and filmed as police officers picked up the women and pulled them away from the holy site.

Officers tried to cover up one of the woman as she was lifted up and carried away.

The radical feminist group, which originated in Ukraine, is infamous for its controversial topless protests against sex tourism, religious institutions, sexism, homophobia and other issues in recent years.