A group of Muslim women have joined forces to protest against the work of Femen, branding them “white colonial feminists”.

The group, which claims Femen are Islamophobes and imperialists, has opened a Facebook page featuring images of women holding up slogans such as “Nudity DOES NOT liberate me and I DO NOT need saving” and “Shame on you Femen, hijab is my right”.

Scroll down for more pictures 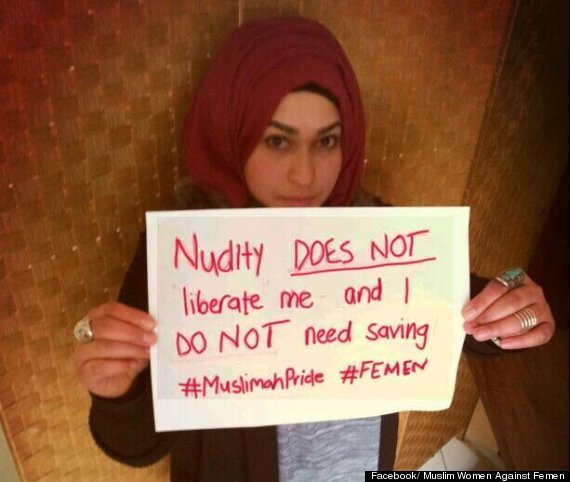 An image from the Muslim Women Against Femen Facebook page

13 members of the Birmingham-based unit have penned an open letter to Femen outlining their objections to the group, which was founded in Ukraine in 2008.

"We understand that it’s really hard for a lot of you white colonial 'feminists' to believe, but- SHOCKER! – Muslim women and women of colour can come with their own autonomy, and fight back as well! And speak out for themselves! Who knew?

"We are proud Muslimahs, and we’re sick of your colonial, racist rubbish disguised as 'women’s liberation!'"

The letter continues, accusing Femen of having “messed up priorities” and advising the group to “take aim at male supremacy, not Islam.”

It adds: “You don’t really care about violence and harm being inflicted upon women, you only care about that when it is perpetrated by brown men with long beards who pray five times a day.” 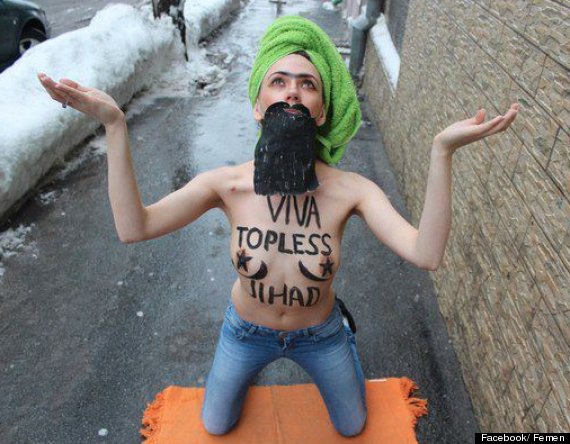 The Huffington Post UK contacted Femen leader Inna Shevchenko for a response and this is what she had to say:

"They say they are against Femen, but we still say we are here for them.

"They write on their posters that they don't need liberation but in their eyes it's written 'help me'.

"You know, through all history of humanity, all slaves deny that they are slaves.

"We are proud to share progressive ideas for all over the world, all ideologies have the place where they were born but ideology of freedom doesn't have nationality or specific location, it's a universal idea that is shared by Arab women too!

"Why do they have to cover their bodies? This is beginning of the process." 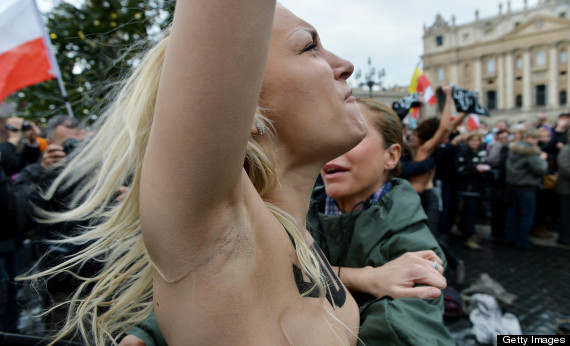 In response, Muslim Women Against Femen spokesperson Ayesha Latif told us she found Shevchenko's comments "racist as well as evidence of colonial feminist rhetoric that portrays Arab/Muslim women as oppressed."

"It is incredibly inappropriate and offensive that they’re taking advantage of the stereotype that us Muslim women have to face in order to further their questionable cause.

"The assumption they promote is that we are subjugated creatures controlled by men, who need to be liberated by a group of perfectly groomed white women posing nude and using shock tactics.

"For them, the more you strip the more of a feminist you are - that’s Western feminist ideology. That’s not liberation for us, but that doesn’t make us anti-feminist.

"We wonder how many Muslim women they have actually spoken to?"

Thursday’s "topless jihad day" saw thousands of women across the globe protesting outside Tunisian embassies and mosques in support of Amina, who was threatened with death by stoning by a Tunisian preacher for baring her breasts online.

In a statement posted on Facebook, Femen called for solidarity against the “lethal hatred of Islamists – inhuman beasts for whom killing a woman is more natural than recognising her right to do as she pleases with her own body.” 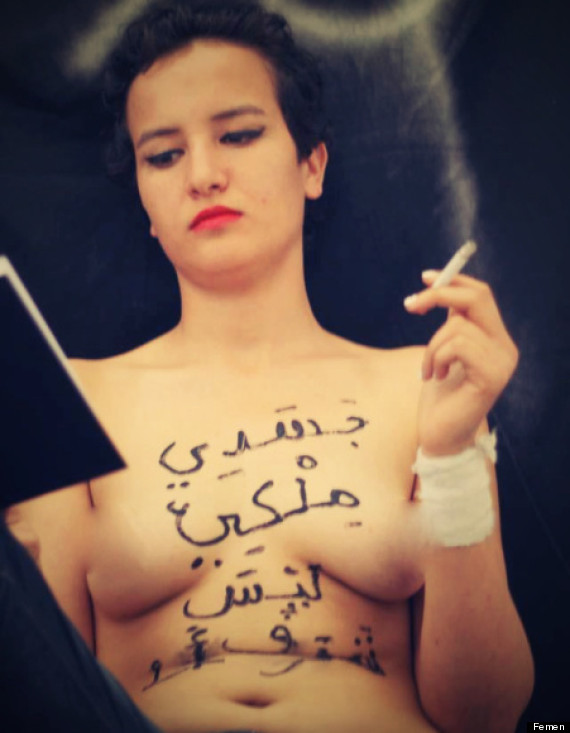 Heralding the event as the beginning of a new Arab Spring, the message urged: “Come to the embassy of the Republic of Tunisia and protest topless, with ‘My Body Against Islamism!’ written on your body.”

It added: “Long live the topless jihad against infidels! Our tits are deadlier than your stones!”

Images of protests underway in Berlin, Milan, Kyiv, Paris, Brussels and Melbourne were posted on the Femen Facebook page as the movement gained pace. A day earlier, Tunisian Femen members had burned a Salafist flag in front of the Great Mosque of Paris (scroll down for video, contains nudity).

Additionally, more than 110,000 activists have signed a petition calling for those who threatened Amina’s life with prosecution.

Meanwhile, Latif asserts Muslim Women Against Femen does not advocate the calls to stone Amina.

She points out: "We understand the call for stoning was from a lone figure in Tunisia, it does not represent the opinions of Muslims worldwide."