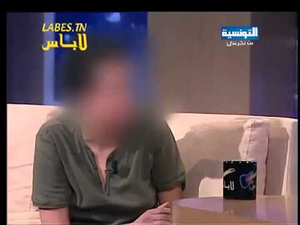 A 19-year-old Tunisian girl was committed to a mental hospital by her parents after posting topless photos of herself in on a website for the Ukraine-based topless radical protest group FEMEN. Amina (last name unknown), had been corresponding online with FEMEN leader Inna Shevchenko since the end of February, mostly discussing the introduction of a branch in Tunisia.

On March 16th, Amina appeared on the Tunisian talk show Labes (posted above), her face blurred to protect her identity, to discuss her yen to bring FEMEN to Tunisia. One Twitter user points out:

She disappeared four days ago after her family's discovery of her topless shots on the website she'd created for FEMEN in Tunisia (which has since been hacked and replaced with excerpts from the Quran). From The Atlantic:

One photo shows her topless, smoking a cigarette, with "My Body is My Own and Not the Source of Anyone's Honor" scrawled in Arabic across her chest. Another shows her raising her middle fingers to the camera, with "Fuck Your Morals," written on her torso.

The Salafi Islamic preacher Almi Adel, who serves as the Commission for the Promotion of Virtue and the Prevention of Vice in Tunisia, called for Amina to be stoned to death for possibly inciting an "epidemic" that's given "ideas to other women." In her attempts to track Amina down after the girl's Facebook was removed and her phone died, Shevchenko came across a video of Amina's aunt saying that she was "now with her family. She had decided to kill herself and so posted nude pictures of herself online."

Richard Dawkins, the author of The God Delusion, has voiced his support for Amina, and other concerned individuals have flocked to Twitter with the hashtag #amina, a campaign on Free Thought Blogs to make April 4th the International Day to Defend Amina. There's also a petition to protect the girl over on Change.org.