Activists from the self-styled women’s rights group, FEMEN, have staged yet another topless protest against Russian President Vladimir Putin. Two protesters bared all in the Schuman district of Brussels, which is home to the European institutions. Russia’s head of state is in the Belgian capital for talks with EU officials. The activists claimed that Putin had been involved in orchestrating and fermenting the recent violence in Ukraine. “The secret services and special services of Russia, disguised as the Ukrainian riot police, are now actively taking part in the suppression of the END_OF_DOCUMENT_TOKEN_TO_BE_REPLACED 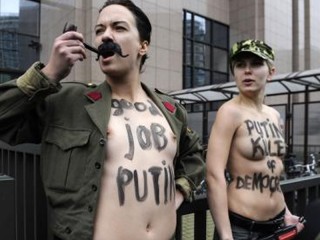