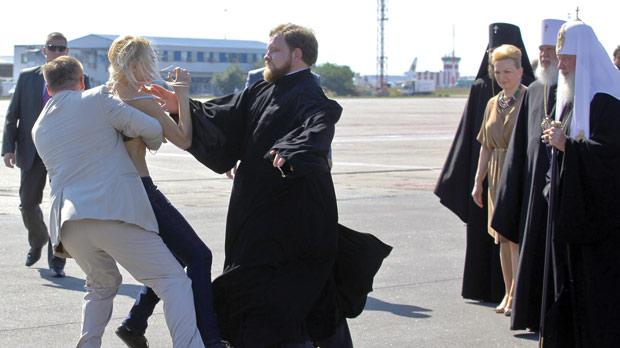 A topless activist of Ukraine women’s movement Femen protesting against the visit of Russian Orthodox Church Patriarch Kirill (right) upon his arrival at the airport in Kyiv, Ukraine, yesterday.

An activist from Ukraine’s prominent feminist rights group Femen yesterday bared her breasts in front of the Russian Orthodox Patriarch just minutes after he flew in to the country.

The topless young woman was bundled away by a burly, robed priest and a security agent who blocked her path metres away from Patriarch Kirill as she rushed towards him in an apparent bid to make physical contact.

The Femen activist was protesting against the influence of the Russian Orthodox Church in Ukraine and the detention of the members of female anti-clerical rock band Pussy Riot. Patriach Kirill clearly witnessed the activist’s actions but stood stoically on the tarmac at Kyiv’s airport, surrounded by his black-robed aides, without making any visible reaction.

Wearing just jeans, the blonde girl managed to shout “get out!” before being apprehended, images broadcast by Ukrainian media said.

Femen, which has gained worldwide prominence for its topless actions in defence of women’s rights, said it accused the Russian Orthodox Patriarch of being behind the “illegal arrest of anti-Vladimir Putin activists”. This was a clear reference to the three detained members of Pussy Riot who face up to seven years in jail for performing a song hostile to the Russian church and President Putin in Moscow’s Cathedral of Christ the Saviour.

“It is very regrettable that people try and cast a shadow over the start of Patriarch Kirill’s visit to Ukraine with such actions,” said the head of the Patriarch’s press service, Deacon Alexander Volkov.

Femen have staged regular actions against prostitution and exploitation of women and have also expressed anger over the regular visits to Ukraine by Patriarch Kirill, who more nationalistic Ukrainians regard as an unwelcome intruder.