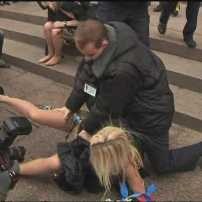 The scantily-clad girls from the group Femen wore traditional Ukrainian garlands with crosses painted on their bare chests.

They fell on their knees near the cathedral entrance chanting 'God, kick out the Tsar!', paraphrasing the 'God Save the Tsar' pre-revolutionary anthem of the Russian Empire.

Cathedral guards tried to chase the protesters and cover them with their coats, as the girls kept chanting in support of Russia's opposition.

"We support (the Russian opposition), you are great, you should go all the way, you will succeed as we did in Ukraine. You will do the same, and you will be able to resist!" one of the protesters said.

Thousands of Russians have taken to the streets of Moscow, accusing the authorities of rigging the recent parliamentary elections.

More than 45,000 Muscovites alone have pledged on Facebook and other websites to join fresh protests on Saturday against the continuing rule of Vladimir Putin and the victory of his United Russia party in Sunday's vote.