Fans attending Euro 2012 in Ukraine may be confronted by the continent's briefest mini-skirts and lowest-cut tops, but they will barely glimpse the day-to-day life difficulties faced by women in the former Soviet republic, rights activists say.

"Fans are going to see lots of attractive women and for many that is going to reinforce the negative image our women have abroad," Anna Gutsol, founder and spokeswoman for the Femen political action group.

"Most foreigners aren't even going to begin to think how hard life for female Ukrainians is, they'll just look at us like some kind of pretty piece of candy," she said.

Femen is notorious in Ukraine for its tactic of sending attractive young women to a public location to strip topless and shout about their causes, and loudly resisting police and security guards sent to quiet them. 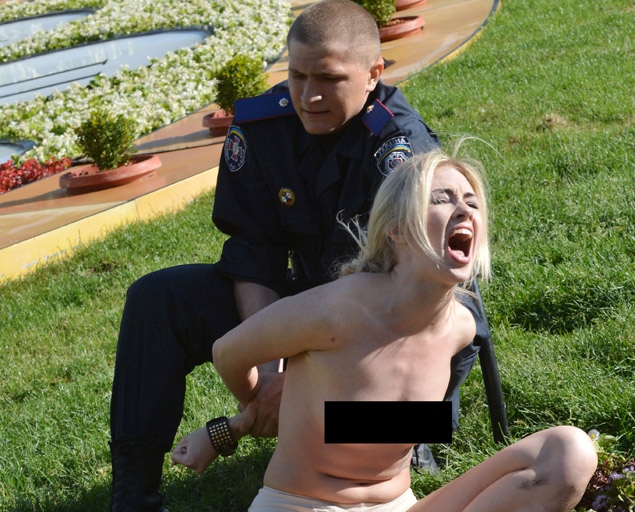 The Euro 2012 championships, touted by the Ukrainian government as a major milestone in the country's efforts to integrate with the European Community, will do little for average Ukrainians and could make things for women worse, Gutsol said.

"Euro 2012 will promote sex tourism in Ukraine, and demean women here even more. In Europe, Ukrainian women have the unfortunate reputation as beautiful, cheap sex dolls, and when the fans get here that image will only be reinforced," she said.

The anti-human trafficking NGO La Strada considers Ukraine a prime source of European prostitutes. A weak economy and even poorer work opportunities for women, rather than Ukrainian social tradition, are the main reasons why, officials said.

Women in Ukraine do not have a very high status. There is huge gender-related discrimination and the society places big pressure on a woman to be a housewife and a mother and nothing else. So there are few opportunities for women who want or need to work," said Mariana Yevtsukova, a La Strada spokeswoman.

As many as 90 per cent of Ukrainian women employed in the sex industry have children, and 80 per cent of them have been victims of domestic violence.

More than 40 per cent of female Ukrainian sex industry workers live with a man unable -- usually because of alcoholism or unemployment -- to support the household himself, according to La Strada data.

"It is true many Ukrainian women work in Europe's sex industries, but it's not because our society allows a woman to wear risque clothes," Yevtsukova said. "No woman wants to be a prostitute. Many women see they have no alternative."

Singer-songwriter Alena Vinnitskaya, a founding member of Nu Virgos, the most popular girl band in the former Soviet Union, and as a soloist one of Ukraine's best-known pop performers, predicted arriving football fans might well be shocked by the amount of skin left uncovered by Ukrainian women during the country's sometimes steaming hot summer months.

There absolutely is a tradition celebrating female beauty in our country, it is part of our history and it's not something we can forsake because in Europe or somewhere else women look differently. Perhaps sometimes the way we dress seems provocative to foreign visitors, but that is by their standards, not ours," Vinnitskaya said.

"I think Euro 2012 is a good thing for our country, it will allow outsiders to see the bad with the good, for instance our terrible roads and our beautiful countryside," she said. "We have few air conditioners."

"But when the fans look at us Ukrainian women, I am afraid they may not see past the pretty exterior," Vinnitskaya said. "Our country is poor and life is difficult for many, and often for the women it is worse."

"We are not going to sit with our hands folded and let our country become Europe's bordello," she said. "Nor are we going to stop being pretty."