A tournament like Euro is more than just football as it represents a social celebration of human values  and humanity in general. When Poland and Ukraine were selected as the host nations of the Euro 2012, along with an opportunity for these footballing nations to rise up their past glory, it brought hope. The hope of economical and social development. While many were skeptic about their chances of hosting this tournament without any glitch, people within these nations were trying prove them wrong. 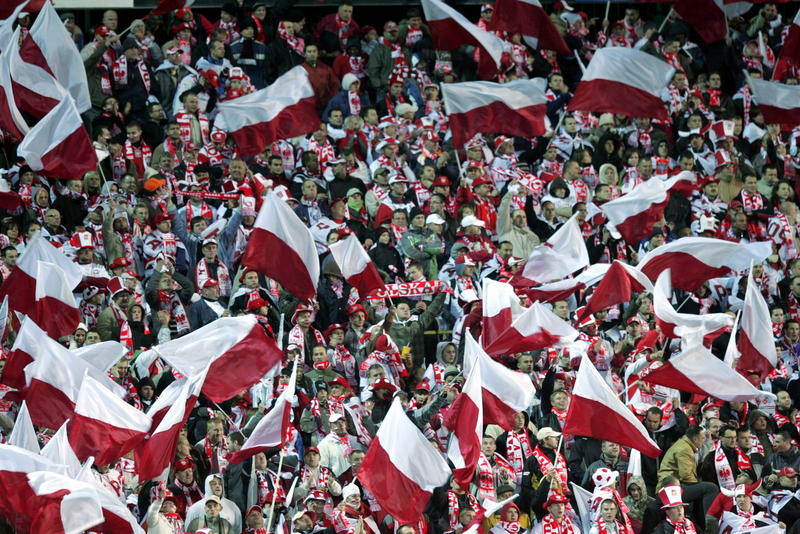 Polish fans at a match

In recent times, a BBC documentary and various media houses have revealed and dissected host of social problems in these two countries, which could possibly spoil the party during the Euro. From Racism in stadiums, to social group and fans protesting against the tournament to political boycott of the games from other European nations due to reportedly inhumane treatment of Yulia Tymoshenko in prison by Ukranian officials. Everything pointed towards an unrest, which could bring disrupt Euro 2012.

While it is easier for media houses in UK to criticize and at times take these issues out of context, we at TheHardTackle decided to interview two well-known Polish journalists, in order to know what is ‘actually’ going on in the country. A insider’s view.

Our first guest is Maciek Słomczyński, news editor and producer of Poland’s first 24/7 news channel TVN24. Our second guest is Michał Zachodny, who is a well-known Polish football journalist, writer of the Polishscout blog and Euro correspondent for Goal.com. Both these guests provide their views on the prevalent questions regarding the various issues surrounding Euro in Poland and Ukraine.

Amlan : A recent poll from Poland’s Centre of Research on Public Opinion revealed that just 48 per cent of the population is happy with the competition being staged in their country. There have also been reports about Polish fans protesting against the Euro in the last round of Polish Ekstraklasa with banners and slogans. Is it because of the heavy expenditure on infrastructure that the country had to bear in such grim economic condition in Europe? How has the preparation for Euro affected the economic condition of Poland in general and will the country be able to benefit from it? Are the fans right to protest against this and will this protest continue during the tournament?

Michal : First of all, still, the majority of the society is happy that we have the Euro nonetheless – and there are more than one poll to confirm this. You see people’s feelings towards the tournament and you know it is going to end up well. The fans protesting on the stadiums were showing their disregard on how Polish FA acts over tickets, supporters and in what state Polish football is. They also didn’t like several call ups of Franciszek Smuda to the national team but that is a whole different story. When Poland was given the hosting rights, we were fairly good financially despite the crisis and that is why so many investments were prepared and finished – including the stadiums. Yes, it may harm the country on a bigger scale but only true pessimists will look at the issue that way. Everyone is right to protest and show their feeling but it is typical Polish behavior to criticize no matter what – just to show there is another stance.

Słomczyński : When it comes to public opinion about Euro, there are two sides of the story. On one hand we have heard very wide promises made by government 5 years ago, when they won first elections. In Poland one of the biggest, if not the biggest problem, is its infrastructure. Warsaw was (and still is, what will change in 2 days?) last the European capital which has no highway leading to it(sic). Few years ago Poland started to build hundreds of kilometers of highways which mostly won’t be finished by the beginning of Euro 2012 (but it will be in 3 months or so). And this plus high cost of building news stadiums (which were necessary) is the biggest concern of Polish citizens. We have also problem with our budget and public deficit.

Amlan : Coming to one of the most highlighted issues – racism and hooliganism in Poland and Ukraine. After BBC’s now famous documentary and reactions from many footballers (including Sol Campbell), the most significant question is – is that documentary a picture of the reality or is just exaggeration of things? Images of Nazi salutes, monkey chants and Indians getting beaten in Ukrainian Premier League match in the Metalist Stadium in Kharkiv have caused lot of stir. Was it a one-off incident and taken out of context? How do you think it will affect the traveling fans in these countries?

Michal : No, that picture is not real. It was selected from several games, carefully picked. No one says there is no problem though, and certainly, Polish FA and league are not doing enough to prevent or stop it, yet the problem decreased in recent years – even those who were questioned by the BBC said this, though their answers were edited later by the producers, which is sad. I wouldn’t like to speak for Ukraine but I think the stadiums for Euro in Poland will be the last place to look for hate or fights. Hopefully nothing serious will happen outside of them as well.

Słomczyński : Racism is not a problem in Poland. I would even say it’s not a problem at all. Poles are very homogeneous when we talk about it. We are nearly all white and Christians in general. There are no ethnic majorities which can be considered as big and influential – maybe that’s why there are no ethnic issues. There were few incidents about 8-10 years ago with football fans shouting at black footballers but in my opinion it has died down since and quite a lot of foreigners mostly from Africa plays in Polish league. Racism not happening any more.

It is a little bit different when it comes to Jews in Poland. Since II world war and then Soviet times in Poland, Jews are in the football fans rhetoric as the enemy(sic). It’s just stupid rhetoric but yes from time to time you can hear some anti-Jews song or see some anti-Jews flags in the stadiums. But it has nothing to do with Jews themselves. You can hardly hear any stories about Jews been beaten up or insulted on the street. I can’t really tell you how it is in Ukraine.

BBC did its documentary in Poland but in my opinion they could make a very similar one in or near some of the British stadiums. And i know that racism is much bigger problem in UK than in Poland.

Amlan : Is the game in danger of being interrupted protests from groups like FEMEN (against sex tourism) and Kazimiera Szczuka (Polish feminist) ? How valid is their concerns? Have the authorities taken any steps to pacify them?

Michal : No, these groups will not stop games, they will not harm the tournament, though their claims should be heard and persons should be listened carefully – as I said, all have the rights to say what they think, it is only down to how they do it. If they will harm fans and influence them badly, the opinion will be as bad about them.

Słomczyński : FEMEN is not an important security or organizational problem to be focused on. They are a very well-organized and already are a known feminist group fighting against prostitution. They are considerate. In Euro they won’t pose a real threat.

Kazimiera Sztuka is well-known, but not supported by any bigger group feminist. She is a writer/publicist/journalist/feminist. She is unhappy with what has been broadly discussed in Polish media, That there is a big group of woman who doesn’t care about football at all and that they will be forced to work harder at home because their husbands will be watching the games. It is totally absurd in my opinion and Miss. Sztuka has no influence on an average Polish person.

Amlan : With French ministry and possibly others, politically boycotting the tournament  in Ukraine in protest at the country’s treatment of jailed former premier Yulia Tymoshenko – what will be the consequences? How will it effect Ukraine and Euro? Is there any danger of massive political unrest during the tournament and what are your views on this issue?

Michal : The political boycott is not happening but I think it would be unfair on the lot that did their best to make the Ukrainian part of the dream come true. And I’m not talking about politicians and so-called authorities – the less is told about them during the football tournament of such magnitude, the better.

Słomczyński : Political boycott in my opinion won’t have any impact on Euro at all. It will be discussed a bit by the politicians, who won’t be in the focus for the next month in Poland and Ukraine.

Amlan : Finally, despite all the above problems, are you confident of Poland and Ukraine successfully hosting the tournament without any major hiccups? What should the authorities do ensure its success? How will a successful Euro in the long run affect football in general in the two countries?

Michal : Yes, I’m sure about it. There were problems on our road, there were issues unsolved even last week, and not everything will be exactly as it should be. But, as I said, it’s not down to the authorities, it’s down to the citizens and the mood is good, the people are there to help, to show how wonderful country we are. If football will be good, we will not have anything to moan about.

Słomczyński : As a news editor/producer of the 24/7 news station I am sure that there will be quite a lot of problems during Euro. There will be some transportation, accommodation problems (especially in Ukraine). There will be some questions about security and organization but I’m sure that Poland will win a lot as a country. I can’t tell if it will be economically or otherwise, but the huge improvement in infrastructure can’t be ignored. Of course I hoped that much more will be done but if you think about crisis which are in Europe since we got Euro hosting rights 5 years ago it’s still quite a lot that we have managed to achieve.

Amlan Majumdar closely follows the English Premier League, along with the Italian National Team, and writes primarily on Arsenal.