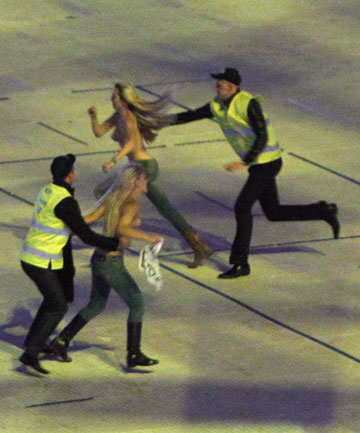 Football achievement to savour - and emulate

Ukraine will use fighters and helicopters to guard its air space and put security and health services on full alert during the European soccer championship, but officials say they can do little to stem a likely flood of prostitutes.

The country's top security and defence official, Andriy Klyuev, told security chiefs that the world would judge Ukraine by how it dealt with the security challenges posed by the month-long Euro-2012 tournament in June.

The leadership of President Viktor Yanukovich is under fire over the jailing of former prime minister Yulia Tymoshenko for abuse of office in what Western governments say is a politically-motivated prosecution. Several Western politicians have said they will stay away from Euro-2012 matches in protest.

The former Soviet republic, co-host of Euro-2012 with Poland, expects about one million fans for the 16 matches to be played in four Ukrainian cities - the biggest single influx of foreign visitors since it became independent 20 years ago.

Ukraine says it will have about 23,000 police on duty for the tournament which opens in Poland on June 8 and climaxes with the final in the Ukrainian capital of Kyiv on July 1.

Anti-terrorism measures include having 10 surface-to-air missile units on standby. Four air fighters and two military helicopters will be deployed to protect air space over the host cities, the Defence Ministry said.

"We will be permanently monitoring the air space of the match cities. All security and emergency institutions and services will be on 24-hour duty from the beginning of June. Medical services and the emergencies ministry will be on heightened alert," said Klyuev, who is secretary of Ukraine's security and defence council.

"Courts will work under an emergency schedule which will allow them to deal quickly with administrative offences by foreigners," he said.

Klyuev said Ukraine was working with the police and intelligence services of some Western countries and Interpol to head off crowd trouble, particularly from "professional" hooligans.

Trouble could range from clashes between rival supporter groups to "outbreaks of xenophobia and racism", he was quoted as saying by his press service.

"The main thing is that we know what the possible threats are and we must be ready to react adequately to handle them. We have to put the time left before the Euros start to the best possible use," he said.

While possible crowd trouble is a concern for authorities, police are at the same time under pressure to improve the poor image they have at home for heavy-handedness and corruption.

The national Euro-2012 organisers on Monday urged police to be on their best behaviour and be "service-oriented and tolerant" in handling foreigners.

Authorities signalled on Tuesday that, despite pressure from social and feminist watchdog groups like the Kyiv-based Femen, an expected surge in prostitution at the Euros is beyond their ability to control.

Some of these groups say the Euro soccer tournament will only give a spurt to the already booming sex industry in Ukraine which demeans the international image of Ukrainian women.

"Tourists are coming with money, and girls from outside Kyiv will try to be here. We are seeing a worsening of the criminal situation," said Vasyl Poshtak, the head of department on combating human trafficking of Ukraine's Interior Ministry.

"We have drawn up a plan to carry out checks at hotels, night clubs, massage parlours and streets where prostitutes work ... we will follow the situation," he said.

But he added: "We will do our best, but this is like tilting at windmills."

Femen, whose female activists strip to the waist in public to dramatise their cause, have carried out topless protests against the Euro tournament by trying to seize the Euro soccer cup which is being taken on a tour of the Ukrainian provinces.

Prostitution was decriminalised in Ukraine in 2005 and is punishable now by a light fine. This was a "serious mistake", he said.

According to Ukrainian social organisations, about 1.5 million Ukrainians are involved in the sex industry and 20 percent of them are under 18, the legal age for sexual contact in Ukraine.

In the eyes of many foreigners, Ukraine is a country of available and cheap woman and many social groups say indifference by police - and even connivance by them in prostitution rackets - is the main problem.

"Prostitution is dangerous for foreigners. Their property can get stolen, they can get AIDS. If problems arise, the only loser in all this will be the image of the state," he said.