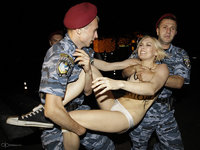 Activists of the infamous international women's movement Femen, who stage semi-naked protest actions around the world, conducted another topless action, this type in Ukraine's capital of Kyiv. As the website of "sextremists" says, two girls, one of them wearing only her panties, arranged a night raid on the place, where President of Belarus Alexander Lukashenko was spending the night.

Lukashenko arrived in Kyiv on an official two-day visit for talks with Ukrainian President Viktor Yanukovych. The head of Belarus was accommodated in the presidential guest residence on Lipskaya Street, Podrobnosti.ua website said.

The action is described on Femen's website in frivolous expressions. The report said that the women arrived to the house on Tuesday night to drive "scoundrel and bloodsucker Lukashenko" out of the den. The following slogans were written on their bodies: "Long live Belarus", "Die, Lukashenko!", "F ** k the dictator!"

As it usually happens in such cases, the sextremists were quickly neutralized. "The dictator was guarded by dozens of police officers and Berkut soldiers," the report says. Photographs on the Femen website show the girls being taken away from the scene of their action by camouflaged military men and police officers. The men appear strict and concentrated.

Femen has its own scores with Lukashenko. In 2011, after three activists Inna Shevchenko, Oksana Shachko and Alexandra Nemchinova conducted a topless protest against Lukashenko's regime in Minsk, the capital of Belarus, they were abducted by unknown individuals. The women were taken out of town to the forest, where their abductors spilled oil at them, promising to set the women ablaze. The men forced the women to strip, threatened them with a knife, cut off their hair and doused their heads with green paint.

In the end, the girls were abandoned in the woods, their documents and money were taken away from them. The feminists managed to get to the nearest settlement and call for help. Femen was confident that activists had been kidnapped by the KGB, but the bureau immediately denied the charges and called the incident a provocation.

The message on the site of Femen says that in their new topless action against Lukashenko, they reminded everyone of "abuse, to which the movement activists were subjected near Minsk," "of thousands of beaten and repressed Belarusian heroes," and "of independent journalist that disappeared without a trace."

"Chase bloodsuckers day and night, do not give them any time to sleep or rest! Drive dictators out from all holes and dens! Long live Belarus!" sextremists appeal to their followers.

Nothing has been reported on whether Lukashenko was informed about the topless incident. On Tuesday, the Belarusian leader will hold talks behind closed doors with Yanukovych. The two presidents will sign documents on the Ukrainian-Belarusian cooperation.

Podrobnosti.ua also said that Lukashenko's youngest son - nine-year-old Nikolai - is a member of the Belarusian delegation. While Lukashenko holds talks with Yanukovych, the boy will take part in a program that had been organized especially for him, the publication said. Lukashenko last visited Ukraine in February 2010 for the inauguration of his Ukrainian counterpart.