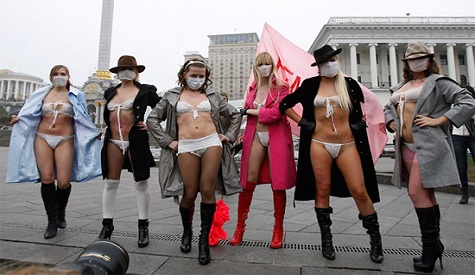 Topless Femen activists are opening a training camp for feminists in Paris. The group of largely Ukrainian women have become known worldwide for their topless protests. They are now launching the instructional facility in France to spread their sexism fighting lessons to a new generation of women. The shirt and often bra-free reformers set up shop inside a Goutte d’Or District former theater.

Femen slogans adorn the old performing arts building. Signs stating, “Nudity is freedom” and “I am a woman, not an object.” Surround a leather punching bag, the New York Daily News reports.

Anti-sexism activist Inna Shevchenko had this to say during an interview with the Guardian:

“We are taking off our clothes so people can see that we have no weapons except our bodies. Soldiers will be born here, but they will not be French soldiers. They will be feminist soldiers, international soldiers.”

Sex trafficking and sexism concerns prompted the formation of the group in the Ukraine in 2008. Topless protesters with “naked war” and “I am free” painted on their bodies propelled the feminists into an international spotlight.

During the 2012 Olympics in London, Shevchenko allegedly used a chain saw to cut down a massive cross in response to the incarceration to the Russian punk rock group, Pussy Riot. The public destruction of the religious symbol caused the anti-sexism advocate to come under scrutiny by undercover agents, and her eventual departure to France.

The feminist training center will reportedly focus on not just what Femen considers a moral obligation, but physical training as well. Shevchenko notes members must be in good shape in order to run away or attack police officers during protests.