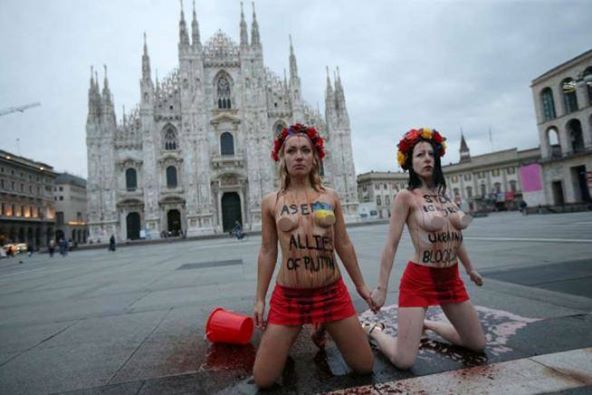 The two protesters with "Stop ignoring Ukrainian bloodshed" written on their torso stood in front of Milan's emblematic duomo (cathedral) and poured red wine representing blood over their chests.

"With such an act FEMEN reminds the world about Putin's criminal policy against Ukraine that has been going on in the last months," the group wrote on Facebook. "Today welcoming Russian Mussolini, shaking his hands, members of ASEM, more than 50 presidents, are collaborating with Putin and accepting his terror policy."

Femen leader, Inna Shevchenko, told AFP that "welcoming a killer, a person who is killing a whole nation right now – and this Ukrainian blood is right here, is on us – and shaking his hand, is ignoring the big torture, the big killing and the war in Ukraine that is started and supported by Putin".

It is not the first time that Femen, a Ukraine-based group, has staged a demonstration against Putin in support of Ukraine. In January, the sextremists took off their tops ahead of Putin's arrival at a European summit.

Femen activists were recently acquitted over a topless protest in Paris's Notre Dame cathedral in response to the news that Pope Benedict XVI was to quit as head of the Catholic Church.The activists stripped to their knickers and bared their breasts, stunning bystanders at the holy site.

They displayed messages scrawled in pen across their bodies such as "pope no more", "saved by the bell" and "bye bye Benedict". Some of the Femen members were punched in the face by angry Catholics before being escorted out of the church by security stuff.

After the Femen demonstration, a 78-year-old rightwing author shot himself in the mouth in front of the ceremonial table at Notre Dame after posting on his blog a damning critique of the same-sex marriage bill, and called for "spectacular and symbolic actions [to] awaken consciences".