Ukraine's feminist group Femen is determined to hold more anti-Lukashenka protests in Belarus despite the ordeal of three activists who were abducted in Minsk and terrorized earlier this week. 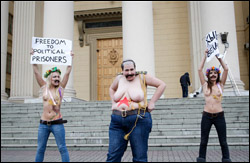 "We have not regretted our decision to travel to Belarus for a single second despite what happened to us there," Inna Shevchenko told reporters in Kyiv on December 21.

"We promise that we will continue coming [to Belarus], undress and defeat the Lukashenka regime," the young woman said.

Ms. Shevchenko was one of the three activists who were subjected to hours of abuse after staging a brave topless protest in front of the KGB headquarters in Minsk on December 19. The women expressed certainty that KGB officers were behind the incident.

Ms. Shevchenko announced that a new Femen protest in Belarus was already in the pipeline. "We will travel, stir the Belarusian people and show that they should not be afraid of these monsters," she said.

The news conference was also attended by the other two activists - Oleksandra Nemchynova and Oksana Shachko. Speaking about the incident, they said that the men who had abducted and terrorized them had acted very professionally and hit them in a way that would not leave marks on their bodies. However, the women said that they still had bruises on their legs and buttocks.

"Tomorrow we will adopt an official statement demanding that the [Belarusian] ambassador be expelled [from Ukraine] and that they punish the KGB officers who humiliated us. We detailed the incident to the Belarusian police and were told that criminal proceedings would be instituted. We doubt that but will demand an inquiry," Ms. Shevchenko said.

Mses. Shevchenko and Shachko both have full-time jobs in the Femen office in Kyiv, while Ms. Nemchynova resides in Donetsk in eastern Ukraine. //BelaPAN