Inna Shevchenko, the 24-year-old leader of Femen in France and de-facto commander of the movement as a whole, scrolled through her iPhone messages several weeks ago, as we sat at a sidewalk table outside a café in central Paris. She studied one new message and smiled.

“The National Assembly has just invited Femen to come discuss women’s rights in France on September 4!”

Earlier in the afternoon, four of her movement’s topless activists had broken into the French National Assembly and interrupted a session. From the balcony above the deputies, they had raised their fists and chanted their slogan, “Êtes-vous macs ou sénateurs? Êtes-vous macs ou sénateurs?” (Are you pimps or senators?). They were protesting the legislative body’s recent rejection of a law that would have criminalized the clients of prostitutes (and thereby armed sex workers with a means of taking legal action against abusive johns).

The startled deputies on the floor looked up and watched as security guards rushed to restrain the women, who continued chanting their slogan in strident unison as they latched onto the gold-painted balustrade and columns, from which they had to be pried free.

“Voilà! Les Femen!” announced the session’s chairman shortly before the guards dragged the demonstrators away.

The group needed no further introduction. Just as France’s political class was preparing to disband for the summer’s grandes vacances, Shevchenko’s activists—the “shock-troops of feminism,” the “watch-bitches of democracy,” as they style themselves—had sent the country a message: Femen is back. 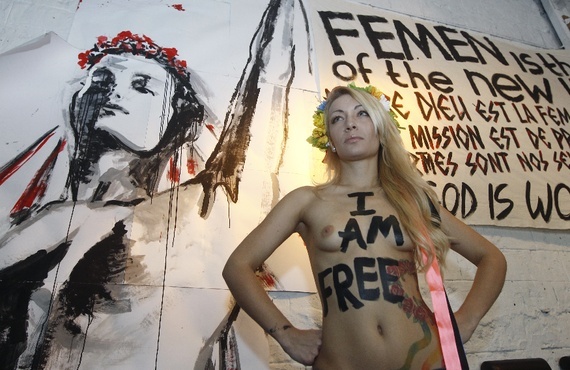 Topless Jihadis: Inside the World's Most Radical Feminist Movement

There was reason to wonder about the fate of the movement. After making headlines in Europe, and especially in France, for months after Shevchenko established its headquarters in Paris in August 2012, Femen largely disappeared from the news last fall. Things were going so badly for the activists that on July 8 their first biographer, the French journalist Galia Ackerman, all but declared the group dead.

When they were in the news, it was for their mounting legal troubles. Earlier this summer, a Paris court ordered Femen fined and evicted “without delay” from the disused suburban utilities property that its members had occupied as squatters since being turned out of their previous residence and headquarters, a dilapidated theater called the Lavoir Moderne Parisien, in November. Notre Dame Cathedral is suing the group for reportedly damaging a bronze bell during a raucous February 2013 protest-celebration there of Pope Benedict XVI’s resignation; each activist has already been fined €1,500 (nearly $2,000). During Vladimir Putin’s June visit to Paris, veteran Ukrainian activist Yana Zhdanova—topless, with “KILL PUTIN” scrawled in red on her chest—invaded the famed Grévin wax museum and, wielding a wooden pick, stabbed the Russian leader’s effigy. She faces trial in September and fines totaling almost €50,000. Another Femen militant, the singer Éloïse Bouton, will be tried in October for “sexual exhibitionism” after simulating, topless, an abortion in the landmark 19th-century Church of the Madeleine.

Femen’s repeated targeting of the Catholic Church has prompted condemnation from the French minister of the interior and the mayor of Paris, not to mention lawmakers. Georges Fenech, a deputy of the center-right UMP party, even led an unsuccessful campaign to ban Femen as a “satanic sect” dedicated to “profaning the domain of the sacred and degrading the authority of religion.” And this is just a summary of Femen’s legal troubles in France. Activists in Turkey, for instance, are also facing jail time.

One French official called Femen a “satanic sect” dedicated to “degrading the authority of religion.”

Will fines and prison sentences, or the threat of them, kill off the controversial protest movement, which, if nothing else, has done much (at least in Europe) to counter images of women as sex objects, or as weak and submissive? From almost the beginning of the movement, Femen members have been in and out of courtrooms and police stations for their protests, which have included daring physical attacks on the men—among them, Putin, former Italian Prime Minister Silvio Berlusconi, and the head of the Russian Orthodox Church, Patriarch Kirill—whom they regard as enemies of women and of human rights in general.

But this time, they confront their cascading judicial tribulations without the support of their longtime, well-connected media champion, the prominent French journalist Caroline Fourest, who earlier this year published an unflattering memoir about her relationship with Shevchenko and has distanced herself from the movement. Charges of Islamophobia have also dogged the group, souring some in the French media on providing it coverage. A documentary released at the Venice International Film Festival last year exposed the role a male “mastermind” played during the organization's early days in Ukraine in 2008, delegitimizing the feminist group in the eyes of many. To make matters worse, three of the movement’s key Ukrainians, Zhdanova, Sasha Shevchenko (no relation to Inna), and the artist Oksana Shachko, announced in May via the men’s magazine LUI that they were splitting from Femen in France. Zhdanova told me in July, “All Femen women have the same ideology. But we got tired of the petty intrigues and personal rivalries we found among the activists in France. We never had this problem when we were just in Ukraine.”

“Doesn’t the split in your ranks bother you?” I asked Inna Shevchenko.

“‘Split’ isn’t the right word,” she told me when we met in Paris. “People are always coming and going from Femen. [Sasha Shevchenko, Zhdanova, and Shachko] are only three members. We have 370 members in France and 25 regular activists in Paris, so how can three leaving be called a split?”

What does Shevchenko make of reports of her movement’s demise?

“Everyone’s so eager to say we’re dead or dying,” she said. “They’re trying to drive us into a corner and minimize our role. We’re used to it. It’s a strategy, a way of shutting doors in our faces. But now look: We’ve just protested in the National Assembly and have been invited to speak there.”

Shevchenko believes predictions of doom stem from resentment against her movement and a desire, on the part of the French government, to shut down Femen and drive her out of the country. Though the government granted her political asylum in 2013, it has inexplicably refused to pay her the modest financial aid usually accorded refugees. (Two other Ukrainian Femen members say they have received both asylum and the subsidy.) Femen has operated under none-too-subtle surveillance from the French authorities, and Shevchenko finds herself subject to hour-long interrogations by airport security officers whenever she takes flights leaving Europe’s Schengen visa zone. Yet despite the surveillance, in July 2013, a fire erupted in her room at the Lavoir, incinerating the few belongings she had taken with her when she fled Ukraine. The blaze came after a day of death threats (“Burn!” read one message delivered via text message to her cell phone). The police have declined to confirm the fire’s cause, but it looks suspiciously like arson. This March, a man asking for Shevchenko entered the Lavoir and knifed two people, apparently mistaking them for Femen members, and almost wounding Shachko, who escaped spattered with blood. “[The assailant] rented a hotel room across from the Lavoir and was asking the staff where I was, but the police decided he wasn’t attacking Femen, he was just crazy,” Shevchenko told me. It’s more evidence, in her eyes, of official, if underhanded, disregard for her movement.