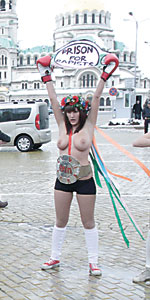 FEMEN will “pass the baton” to Bulgarian Manuela

Photo: Anton Chalakov“FEMEN will have its branch in Bulgaria very soon. The girl who protested with us on Saturday is a Bulgarian and her name is Manuela,” Ukrainian FEMEN activist Inna said. “We didn’t know her before the protest. She was a volunteer, a girl, who was abused by her father as a child. She believed in our cause and realized that to solve a problem, you have to admit its existence first. And to be heard, especially when you are a woman in Bulgaria, you have to provoke the public,” Inna added. “We think Manuela will be a founder of FEMEN branch in Bulgaria and she agreed. I can assure you that the next protest of FEMEN in Bulgaria will be with the participation of Bulgarian women only. Topless Bulgarian women!” - Inna promised.