Recently, Femen, the controversial Ukrainian feminist organization, has been established in France. Femen was founded in 2008 to protest sexism, patriarchy and violence while advocating for feminism. Its members became well-known for protesting naked against sexism, trafficking, religious institutions and sex tourism, among others.  The group, which has become internationally known, has also been able to gather members in some other countries in Europe.

The movement’s founder, Anna Hutsol, is an educated 28-year-old who created the organization to enable women to gain access to the public sphere in an environment where men are still favoured. For the members, Femen sets itself apart from traditional Western feminism in that they aim to advocate for a “real women’s revolution” where women do not have “to be like men” to be recognized in society.

Femen pursues many of its political goals by holding topless protests (although most of their members remain dressed). Femen has protested in a number of places, an important one included the Iranian embassy in Ukraine; there, Femen protested the possible execution of Sakineh Mohammadi Ashtiani. Likewise, its members have opposed the legalization of prostitution and sex tourism in Ukraine and they have demonstrated against Putin’s government.

Femen has now settled in France by invitation of some French feminists. What has been labeled as a “feminist boot-camp,” due to its goal of “training” women in a variety of areas including feminist ideologies (or what Femen considers to be “feminist”), now has its main office French in an area with a large immigrant Muslim community.

Femen’s slogans include things like “better naked than the burqa” or “Muslim let’s get naked,” so it’s not hard to imagine the reaction among some Muslim communities.  Rt.com suggests that Femen has the intention to encourage Muslim women to “strip” in order to be free. Femen has been associated with taking stands against Shariah and some Muslim governments, and seems to be inviting Muslim women to join the movement. 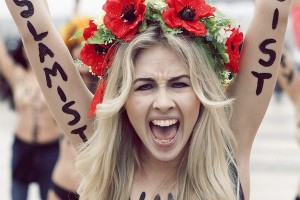 A Femen member at a protest. Via International Policy Digest.

While Femen’s approaches are not necessarily anything new or surprising at least in the Western world, everything is contextual. Topless protests may work wonders in some parts of Eastern Europe and France, but may not be welcomed in other environments. In addition to the issue of “getting naked” and encouraging Muslim women to take off their veils further shows lack of understanding among different feminist groups internationally.

As sad as it is, some feminists continue to preach that feminism can mean one thing and only one thing. They are reluctant to recognize the possibility that “being like men” or protesting topless are not every feminist’s dream.  Movements such as Islamic feminism (which is itself varied, and also has its problems and challenges) have demonstrated that Western feminism is not necessarily the answer for Muslim women because sometimes feminisms can even be Islamophobic as explored by Sharrae in an earlier post.

Furthermore, feminisms can be, and have been, exclusive in many contexts. Not recognizing the other’s need to find gender equality in different ways, or assuming that a certain level of covering or uncovering will be synonymous with equality, just serves to deny other women’s experiences and needs. Some feminists also takes for granted the idea that all Muslim women are the same and dress the same when in reality there is a wide variety; some wear hijabs and niqabs while others enjoy going topless, not because Western feminists have rescued them, but because is their own choice.

In an environment like France where many feminists, including Muslim ones, insist that taking a woman’s clothes off (i.e. niqabs and hijabs) means freedom, Femen just comes along to perpetuate the lack of understanding.

Besides, sometimes some feminists’ comments on the “Muslim question” of gender just make me roll my eyes… who told them that all Muslim women need another Western advocate to take their clothes off? Why do we continue to put emphasis on the clothing? Does it necessarily make us freer or more oppressed?

Whereas I respect Femen’s attempt to lead some kind of feminist advocacy, I am skeptical of the possibilities that this brings to Muslim women in France and world-wide. Reading things like “Better naked than the burqa” just sparks the sarcasm in me and make me think “Really????”