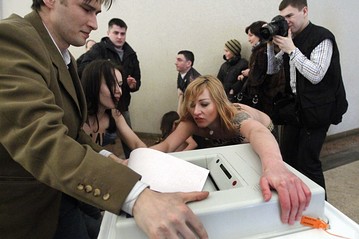 Naked theft. That appeared to be the message a group of women’s rights activists were trying to convey Sunday in protesting Russian Prime Minister Vladimir Putin’s attempt to return to the Kremlin for a third term.

At a polling station in Moscow, three young women from the Ukrainian group FEMEN drew the attention of TV cameras, which had just filmed Mr. Putin casting his vote, and stripped to their waists to reveal the slogan “I will steal for Putin” painted across their bare chests and backs. They then started shouting “Putin is a thief!” and tried, unsuccessfully, to make off with the perspex urn in which the prime minister’s ballot lay.

FEMEN, which made its name campaigning against sex tourism in Ukraine, has made bare-breasted protest its trademark (“We came, we undressed, we conquered” is its mission statement). It has demonstrated in the past against gas monopoly Gazprom’s “gas blackmail,” against former Italian Prime Minister Silvio Berlusconi’s alleged links with prostitution and against the re-election of Alexander Lukashenko as president of Belarus in a vote that was widely criticized as being rigged.

Russian television had given FEMEN’s protest against Lukashenko extensive coverage at the time. With a pleasing symmetry, Sunday’s FEMEN operation was documented in loving detail by Belarusian TV.