Almost totally naked, but armed with boxing gloves and red paint marks on their faces to imitate blood, the Ukrainian girls became rather violent when surrounded by – predominantly male – members of the press.

As they started to deal blows left and right, the policemen guarding the region interpreted rightly their symbolic aggression and did not resort to arrests. 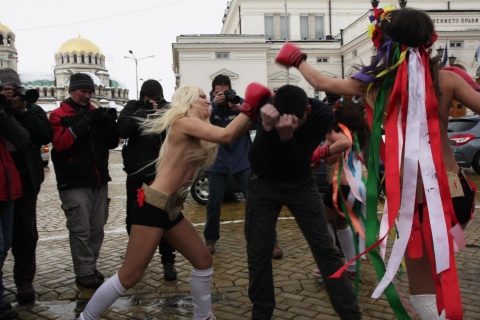 The Ukrainans, who attracted global renown by staging intelligent and controversial protest actions while almost naked, say they have data that 1 in 4 Bulgarian women has been subjected to violence at home.

At the same time, the first ever guilty verdict for domestic violence in Bulgaria has been issued as late as end of 2011, argue FEMEN.

The Ukraine activists also state they have good reasons to believe that the number of Bulgarians who have become victims of human trafficking is much larger than officially reported. 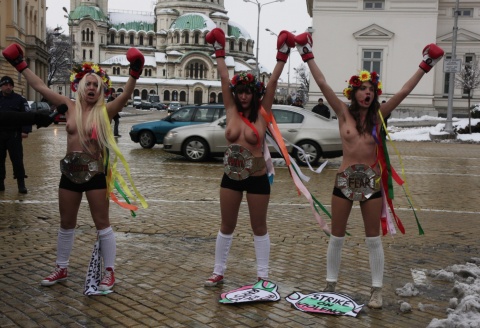 FEMEN specifically presses for urgent and adequate amendments to the Bulgarian Criminal Code in the fields of violence against women and children, a just and equitable judiciary, as well as more severe and effective sentences for proven offenders.

The organization staged the event in Sofia under the motto: "Their God is a Woman, their Mission is Protest, their Weapon are their Breasts!"