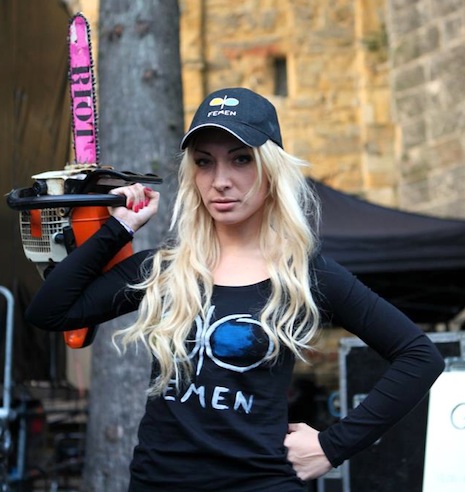 FEMEN member Inna Shevchenko at the GOGBOT festival in the Netherlands before she cut down a series of wooden crosses. Photo from her Facebook page.

For two groups of women that have never met, topless FEMEN and balaclavaed Pussy Riot have already become seamlessly interwoven in the public mind. In a part of the world until recently not know for its protests, the two groups are unmistakably young, female, and confrontational.

Unsurprisingly the two were pulled even closer together by the free Pussy Riot rallies and demonstrations that erupted across the world, which saw participants not only wearing Pussy’s Riot’s signature balaclavas, but often showing their breasts and painting their bodies in free Pussy Riot slogans in signature FEMEN style.

The overlap went one step farther on the day of the Pussy Riot verdict when FEMEN activist Inna Shevchenko chain-sawed down a massive wooden cross in central Kyiv erected on public land by the Ukrainian Greek Catholic Church.

Though there are conflicting accounts of which exact group of the Soviet state’s victims the cross was erected to memorialize, and even if it was done so legally, Shevchenko later admitted in an interview with Euroradio’s Liavon Malinovskiy that the group had not known about the history of the cross.

Shevchenko, however, was quick to weave the cross’s history into the protest narrative, emphasizing that “we can’t just think about [politically] repressed old people, the fact is the same thing we fought against fifty years ago is happening again.”

On their LiveJournal page FEMEN described the cutting down of the cross as an “act of solidarity” with Pussy Riot, and called on “all forces in society to mercilessly saw out the rotten superstitions from their minds that support dictatorship and prevent the development of democracy and freedom of women.”

They also warned Putin and the head of the Russian Orthodox Church that if the Pussy Riot activists were convicted that FEMEN would “direct the vengeful blades of its chainsaws towards the scum responsible for the suffering of innocent women.”

The initial protest was followed by calls on FEMEN’s Facebook page to cut down crosses across Russia and Ukraine, and photoshopped images of FEMEN holding up the bloodied heads of Putin, Lukashenka, the Patriarch of the Russian Orthodox Church, and the Pope.

In a mark of FEMEN’s international celebrity, only a few weeks later Shevchenko was in the Netherlands, chainsaw in hand, cutting down a specially constructed cross at a Free Pussy Riot rally.

Despite FEMEN’s eagerness to associate themselves with Pussy Riot’s rising profile, the imprisoned members of Pussy Riot have been less eager to link their protests and goals with FEMEN’s.

When asked about the relationship between Pussy Riot and FEMEN in a recent interview with the Russian newspaper Novaia Gazeta, Pussy Riot member Mariia Alekhina emphasized that they “share the same sudden appearance and protest against authoritarianism, but we look at feminism differently especially the type of our actions. We have never stripped and never will. The latest action cutting down the cross unfortunately doesn’t create any feeling of solidarity.”

The felling of the cross, however, has become the defining post-trial moment, further confusing FEMEN and Pussy Riot.

The Russian state-controlled media was quick to blame the wave of copycat cross fellings across Russia that followed FEMEN’s protest on Pussy Riot’s supporters.
The Head of the Russia Orthodox Church’s special affairs department, Vsevolod Chaplin, went so far as to claim that “People who are currently cutting down crosses in the future may turn to violence and murder.”

The prophecy seemed self-fulfilling when four days later two women were found murdered in Kazan with the words “Free Pussy Riot” written on a wall, and the state-controlled media was quick again to blame Pussy Riot’s followers.

A man was later arrested for the murder and confessed to writing the words to throw investigators off of his trail, but that failed to stop the anti-Pussy Riot rhetoric.

Russian Orthodox Archpriest Dmitiri Smirnov later claimed the Pussy Riot’s “punk prayer” signaled an attack on the Church similar to how the firing of the battleship Aurora’s guns signaled the storming of the Winter Palace during the October Revolution.

In another interview with Novaya Gazeta, imprisoned Pussy Riot member Yekaterina Samutsevich emphasized that “if we, by way of our actions in the cathedral, were giving a signal like the Aurora, it was to attack the uncivil politics of authoritarian powers, of which Putin and his friend Patriarch Kirill have become symbols — the latter who used his status as a holy man for wholly unholy purposes.”
“We are against any physical destruction of cultural objects and symbols, including the symbols of the Orthodox religion,” she added later in the interview.

Those statements have been supported by Pussy Riot’s only action since the trial ended: the torching of a giant image Putin absent any religious imagery or reference to the Russian Orthodox Church.

In their protests Pussy Riot has focused on Putin as the source of oppression, where FEMEN has increasingly focused on religion in general. What both groups have dealt with, however, is a certain complacency in the relationship between church and state that has emerged in the post-Soviet space over the past twenty years.

Pussy Riot metaphorically attacked the closeness of the Russian Orthodox Church and the Russian state.

FEMEN literally, and perhaps unwittingly, attacked the crosses that have sprung up over the past twenty years that have become the symbol for anti-communism and Soviet atrocities despite the fact that many of the victims were neither Christian nor religious.