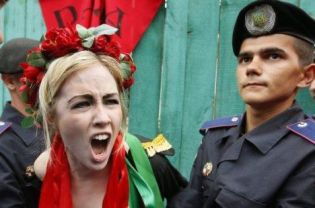 Ukranian women's rights group Femen has made it clear that they will be a presence at the Euro Cup 2012. (EPA/Sergey Dolzhenko)

Euro 2012 in Poland and the Ukraine is only days away, and as the second biggest football championship after the World Cup, this year’s Euro Cup is offering drama even before the competition.

At the group stage, the competition allows underdog teams to shine and unknown, young players to show their teeth to rich football club’s owners for next season’s fixture.

But even before the competition kicks off this Friday, the two host countries have put themselves in the spotlight. Poland and Ukraine are facing protest from their respective populations and from the entire world because of their sex industries.

In Indonesia, football and sex are two things that aren’t related — but in Poland and Ukraine it’s a different story, as the two often go hand in hand.

The protests over prostitution in Poland and the Ukraine have escalated recently. Ukrainian feminist group Femen, known for its topless protests, warned that Euro 2012 could see a rise in sex tourism. Although illegal, prostitution in Ukraine is widespread and largely ignored by the government.

Because of fears of the increasing number of sex tourists in Ukraine brought on by an influx of fans from richer West European nations,  protesters have threaten to stage even more forceful protests and to disturb the competition.

Apart from outside influences, the drama also comes from within.

And England has been loosing their key players one by one: Defender Rio Ferdinand was pulled off from the squad following clashes with teammate John Terry, Arsenal’s midfielder Jack Wilshere suffered an injury, and striker Wayne Rooney is suspended for the team’s crucial first two games.

The Group stage will be difficult for these teams as it determines their fate through the duration of the Euro Cup. Group B, also known as The Group of Death, poses challenging fixtures as Euro 2008 finalist Germany, World Cup 2010 finalist The Netherlands, Portugal and Denmark battle to go to the next phase.

Group A might not be that amusing to watch as it lacks big names: Host country Poland, Russia, Greece and Czech Republic, which is now equipped with their strongest team since Euro 1996. Greece, meanwhile, still has the ability to surprise, like they did in Euro 2004 on their home turf.

In Group D, Ukraine may be playing in front of its hard-line supporters, but they’re not a match for the rest of the teams: England, France and Sweden. England and France will seek their path to glory, while Sweden counts on striker Zlatan Ibrahimovic to perform more magical actions and less controversies.

The group stage makes it easier for the big teams like Spain, Italy, Germany and The Netherlands to secure a place in the next phase. But there is chance that underdogs like Poland, Croatia and Czech Republic, which has a number of promising young talents, to make surprises.
As the competition grows nearer, prepare to hear more of these names after the Cup: Theo Gebre Selassie (Czech), Robert Lewandowski (Poland), Yann M’Villa (France), Olivier Giroud (France). These names may be unfamiliar to your ears now, but as is often the case with the Euro Cup, this can change. This is the time for these young, talented players to show off their skills along with established European idols like Cristiano Ronaldo, Bastian Schweinsteiger, and Robin van Persie.

But above all else, we can set aside troublesome Indonesian football at the moment.

Be the first to write your opinion!