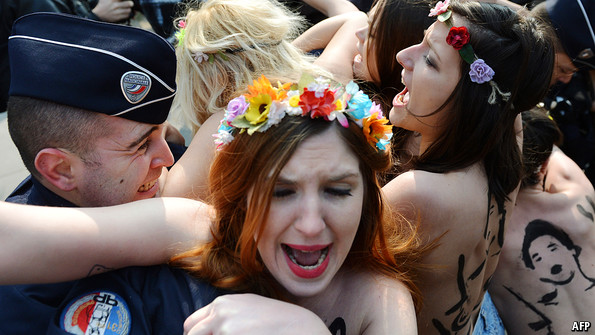 ITS activists have dressed as policemen and sex workers in Kyiv; as marathon runners and Muslim men in London; and as nuns and maids in Paris. Femen, a Ukrainian women’s movement, mostly fights against pornography and prostitution—yet all its protestors demonstrate topless. Why are some feminists going bare-breasted?

Part of the reason is that most legal avenues have already been pursued, with marked success. British women gained the Equal Pay Act in 1970; their French sisters won the right to abortion in 1975; and by 1980 American women could sue for sexual harassment. Yet women's bodies have become objectified on a scale “as never before”, says Kat Banyard, co-founder of UK Feminista, a British feminist movement. The female body is the new battleground, from campaigns against Page 3 girls and “lads’ mags”, to the SlutWalk marches, during which women claim their right to undress without insult.

Femen forms part of this fresh wave of feminist protest. Its early demonstrations targeted Ukraine’s sex industry and macho culture. Topless protests are intended to ridicule (mostly) male voyeurism. By stripping, Femen says, women expose their vulnerability but also use their naked bodies as weapons. Its grand aim is to give new meaning to the nude female, as a political tool instead of a sex object. “It no longer works to promote yoghurts and cars”, says Inna Shevchenko, the leader of Femen’s Paris branch and training centre. When the group first protested in 2008, activists dressed provocatively, but did not show their breasts; when one did on a whim in Kyiv, Femen realised the media attention that nudity could garner. Alice Schwarzer, a leading German feminist, thinks that the protests work so long as the message gets more attention than the flesh.

This view is not universally held. Hind Makki, a Muslim feminist blogger, balks at their methods: “It is regressive to make yourself look like a sex toy,” she says. Others predict that media interest in protests by topless feminists will wane. That seems unlikely.