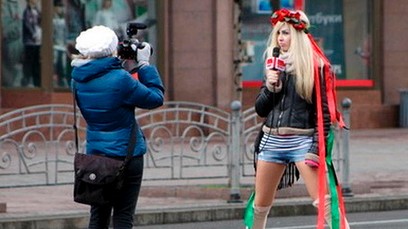 Your feedback was successfully sent.

KITTY Green's "wild and crazy ride" in eastern Europe was sparked somewhat innocuously on a Melbourne train in 2010.

It was there that the independent Melbourne filmmaker saw a newspaper photo of Ukrainian social activists Femen — feminist protesters who strip to the waist while demonstrating over various causes.

"They were half-naked and they were holding these signs saying, 'Ukraine is not a brothel', and I just thought that was bizarre — a strange way to protest against sex tourism." 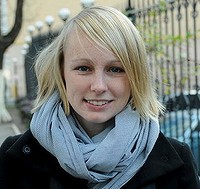 As things turned out, documenting their antics would result in the 27-year-old's arrest last month by the Belarus KGB.

The Femen members she had gone there to film had a dramatic story of their own, alleging they were abducted, beaten, stripped and doused in petrol as their captors threatened to burn them in a snow-covered forest.

Green first met Femen after travelling to Ukraine in 2010. She spent six weeks with the group, filming several demonstrations a week, before returning to Australia later that year. 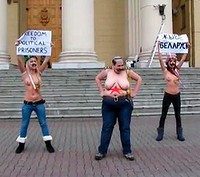 Femen protesters on the steps of the Belarus KGB headquarters in Minsk last month.

"They're very fun to shoot — they scream, they hang on to the police car, they hold on to each other, and it's always really difficult for the police to disband them and force them into a car. They're released pretty quickly in Ukraine, usually after a few hours.

"I'm always waiting for them to get arrested, getting the good arrest shot. But in Belarus, instead of them getting arrested, [the authorities] arrested us."

She had returned to the Ukraine capital, Kyiv, last July to make a documentary about Femen. Several weeks ago, three of its members decided to visit Belarus to mark the first anniversary of President Alexander Lukashenko's brutal crackdown on opposition supporters after the 2010 election. 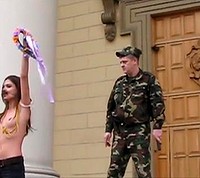 An officer in fatigues watches on from the steps of the KGB building.

Green travelled to Belarus and arrived at the KGB headquarters in Minsk at 11am on December 19. Officially known as the State Security Agency of the Republic of Belarus, it is the only intelligence agency to keep the Russian name KGB following the dissolution of the Soviet Union.

"Femen arrived . . . in a taxi, stripped off their tops, pulled out their placards and started the protest. There were about six other media there. I was filming the protest . . . then I noticed a few journalists walked away. They left, and I thought, that's funny, the protest hasn't finished. 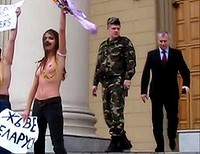 A second official arrives on the scene as members of Femen continue their demonstration.

"The girls managed to run off into the distance and I got dragged by the arm into this room, in the back of the KGB building . . . I was very shocked by the whole thing, I couldn't think properly."

The KGB officers also took the group's cameras and memory cards, from which they deleted footage. They then drove Green and the two journalists to a building on the outskirts of Minsk. 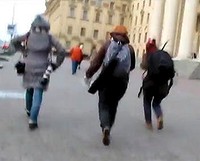 Journalists run from the scene after security officers appear. Moments later, Green was detained along with two Belarusian reporters.

Despite Green's repeated requests, it took six hours for a translator to arrive. He told her the KGB officers wanted her to sign a statement detailing what had happened. Because it was not written in English, she could not read it. Green said she asked for the statement in English but they refused. She eventually signed what they gave her and the officers returned her phone and let her speak to the Australian embassy in Moscow.

Before her arrest, Green had booked a ticket for a 7pm train to Vilnius in neighbouring Lithuania. "All day I kept saying, 'I want to get my train to Lithuania.' I think they wanted me on that train, and if I'm out of their hair that's good for them. It wasn't that the Australian embassy intervened." 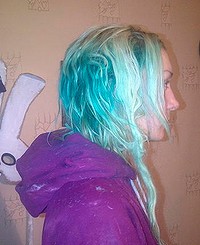 A member of Femen pictured after the trio were reportedly stripped, beaten and doused with petrol.

Just as she thought she would finally be able to leave, her experience became even more frightening. The translator offered to take her to the train station, but the KGB officers refused.

She asked if she could go with the journalists, take a taxi or even catch a bus. "I really had to insist. I cried and I offered up a heap of alternatives. And they finally let me. But only after they made a secret phone call. That phone call terrified me. I didn't know who was following me. Or who needed to know where I was heading."

She was finally allowed to catch the bus to the nearest metro and then a train to Minsk's main railway station, where she feared she was being followed. When she got on the train, a "big burly man" sat next to her in an almost empty carriage, then bombarded her with questions.

"I could tell he wasn't just some guy on the train. I don't know exactly, but I was pretty sure he was sent to see that I crossed the border."

She got off the train in Vilnius and ran to her hostel, then went online only to see hundreds of news stories about her arrest, many of them with her picture attached and referring to her as Femen's "videographer".

While detained in Belarus, Green had stressed to the KGB officers that she was in no way employed by Femen and was simply documenting their protest as an independent filmmaker.

"I was a bit scared they would come after me for lying, but I hadn't lied. That was very scary. I didn't feel very safe in Lithuania at all."

The Department of Foreign Affairs and Trade confirmed that its consular operations section spoke to the honorary consul, Antonio Meschino, and arranged for Green's escort. A spokeswoman said the department was first notified of Green's arrest by her father on the afternoon of December 19.

"Despite attempts to confirm Ms Green's arrest with the local authorities, the embassy did not receive any formal notification."

The Moscow embassy contacted the Belarus KGB and Ministry of Foreign Affairs in an attempt to confirm the arrest, but received no official advice from them.

"The embassy was then able to get through to Ms Green on her mobile phone, when she informed us she was in the process of being released and departing Belarus."

Green returned to Kyiv the day after her arrest and spoke to the Femen trio about what had happened to them in the forest.

"I . . . heard from the girls that they [were told], 'If you say anything about this we will kill you.' And then they told everyone. The girls were terrified they'd come after them, and I was scared to be around them. I just thought, I'll get out of there."

Green then travelled to western Europe, where she has been spending time with friends.

She said she planned to return to Ukraine to finish her documentary. "I'm just an independent filmmaker having a weird experience in Ukraine and got swept up in this story. This is my first long-form film and it's sort of a topic I couldn't say no to, it's too weird and exciting. It's been a wild, crazy ride."

John Besemeres, adjunct fellow at the Centre for European Studies at the Australian National University in Canberra, said Belarus had become much more repressive over the past year, since Lukashenko's brutal crackdown against demonstrations over his re-election.

"They're very different, Belarus and Ukraine," he said. "It really is much worse in Belarus. It really is a neo-Stalinist country.” He described it as “a wretched place" where the secret police were very active.

"There's a lot of Soviet nostalgia, but not the good kind," and certainly not for former Soviet head of state Mikhail Gorbachev's reforms.

Besemeres said it was generally far more dangerous for Belarusians than for Westerners. "Foreigners don't normally get caught up in it."

However, he said Belarusian authorities would have taken a dim view of Femen's protest on the anniversary of the election. "There's a kind of male chauvinist brutishness in terms of, 'Who are these hussies?'"

He said intelligence agencies may have monitored Green as she arrived in the country if they suspected she was involved with Femen.

"It's conceivable that she was a person of interest if she had been dealing with Femen for some time."

When told about Green's suspicions that she was being followed after her release, he said it was "very much likely".