Director Kitty Green, a VCA graduate, embedded herself with a core group of FEMEN members when she travelled to Ukraine in 2012 to research her family tree. Consequently, she found herself caught up in the group’s ascent. “When I first arrived in Ukraine, Femen was a Ukrainian movement,” she recalls. “I filmed some of their first protests. After each protest, I would edit a video together and hand it to them on a USB, and they would distribute that footage to the press. So in some ways, my presence had an impact on the international growth of the movement. The footage was screened on BBC, CNN and across the internet.”

Thus Green, like the activists she was filming, was arrested numerous times, abducted, had footage stolen by the KGB, and was at one stage deported to Lithuania. It’s heady stuff, and initially, difficult viewing for anyone with a set idea of FEMEN’s politics either way; seeing committed young activists, who have been rejected by the group, talking about how “In order to promote the brand, FEMEN needs beautiful girls” with a resigned shrug, it’s easy to feel one’s blood begin to boil. But seeing naked women dragged through the streets, set upon by mobs, and at one point, kidnapped, is just as disquieting. 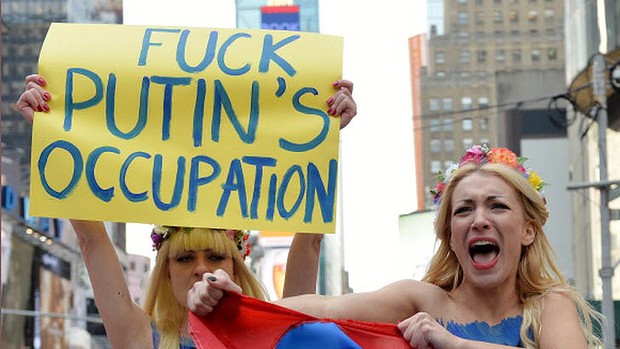 Your blood may boil for a different reason, however, upon watching the entire documentary, as it's slowly revealed that FEMEN was founded and is controlled by a man, Victor Svyatski, often referred to as a “consultant” to the movement.

Green maintains that the film’s revelations mirror her own discoveries. “The structure of the film and the ‘revelation’ of Svyatski [as a mastermind] reflect my own experience of the situation. Immediately, upon arrival, I thought it was a contradictory movement. The situation only grew more absurd and complex as I spent more time with the women.”

And it’s the women who complicate any preconceived notions you might have about FEMEN. For this reason, it’s worth viewing Ukraine Is Not A Brothel first and foremost as an exploration of a Ukraine-based feminist movement that sprang up in response to a very specific cultural climate, which is in turn the reason why many of FEMEN’s international protests have been culturally tone-deaf. 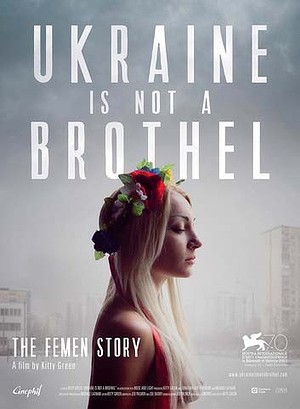 Promotional poster for Ukraine Is Not A Brothel, showing at the Melbourne Film Festival this week.

Indeed, that the women involved have discovered feminist politics at all seems remarkable given some of their circumstances. Green agrees, and admits she wrestled with the implications of revealing the extent of Svyatski’s power over the group. “I was really worried about ‘outing’ Victor’s role,” she says. “I didn’t want to ruin this organisation. Whilst I had my doubts about the way that the organisation was run, I believed in the women and wanted to support them. I didn’t want to discourage them from their activism.”

If anything, illustrating Svyatski’s influence may mean that FEMEN are viewed with a renewed sense of context; is it not, in fact, a tragically ironic portrait of what happens when a patriarch designs his perfect “feminist” army? Key FEMEN member Inna Shevchenko wrote, upon Ukraine’s Venice Film Festival premiere, “Having been born in a country in which feminism was unknown, in the best traditions of patriarchal society we just accepted the fact of a man taking control of us. We accepted this because we did not know how to resist and fight it.”

That the women of FEMEN have since diversified their ranks and continued to educate themselves is a testament to their tenaciousness. It’s possible that despite their shaky, flashy start, FEMEN may evolve as its members learn more about feminism in a global, intersectional context.

In a way, this relates back to the current “PR problem” within feminism, which is that certain corners of the movement expect a monolithic feminism, and one that has little room for nuance or the consideration of cultural context. (The irony of FEMEN’s own lack of cultural appropriateness is not lost on me.)

Green tells me she wanted to provide a portrait of a movement within the culture that gave birth to it. “Femen Ukraine is a product of the patriarchal culture that is deeply entrenched in the post-Soviet states,” she says. “The film aims to paint intimate portraits of these women’s lives in a corrupt, poverty-stricken, patriarchal Ukraine. By living with them in their crumbling apartment blocks and interviewing their family and friends, I wanted to shed more light on just how such a deeply paradoxical feminist movement came about.”

That is, it must be stressed, not a ‘Get Out of Jail Free’ card for some of FEMEN’s more bombastic protests; since they have relocated to France, much of that country’s hardline stances on religion (particularly of the anti-Islam variety) have influenced their politics.

As feminist academic Susan Carland wrote last year in the aftermath of Amina’s FEMEN-supported protest in Tunisia in which the group called for an “International topless jihad day”, “FEMEN supporters even openly ridiculed Muslim women who argued that such behaviour was problematic, calling them ‘fearful victims’ and ‘brainwashed’ on the official Femen Facebook page.”

There is considerable irony, then, in the FEMEN members in Ukraine essentially admitting to having been brainwashed by Svyatski, victims of Stockholm syndrome.

In other words, Ukraine Is Not A Brothel offers no easy answers - something lost on some feminist commentators who have already attacked Green for “promoting” FEMEN, or for not editorialising within the course of her film (apparently they are unclear on the impartial nature of documentary filmmaking). “I often feel like I’m forced to defend them in a situation like that,” she says. “It is a difficult position for me to be in as a filmmaker as the film is an exploration of all the contradictions; I’m not an activist, I’m a filmmaker. I really hope audiences are intrigued and excited by this bizarre story and I hope it encourages some lively post-screening conversation. Truth really is stranger than fiction.”

Ukraine is Not a Brothel is screening at the Melbourne International Film Festival, on Thursday, August 7, at 9pm at Hoyts Melbourne Central.

Daily Life is a proudly female biased website with content tailored to women. We encourage lively debate and conversation around our stories and while all opinions are welcome – we also have some guidelines to make sure everyone is treated with the respect they deserve. We love comments that articulate a different point of view, a witty insight, some humour or a shared experience. Our moderators will reject comments that personally attack the author or other commenters. We also won’t publish comments that are aggressive, sexist, racist or in any other way discriminatory or derogatory.

We hope these guidelines make the process of commenting on stories and reading the comments left by other users as enjoyable as possible. More details about our comment policy here.

You will need Javascript enabled to use our Commenting Feature.

All information entered below may be published.

Comments are moderated and are generally published if they are on-topic and not abusive.

Get our best stories delivered to your inbox each day!

Marriage and parenting is hard work, but who knew it could be harder work than, well, work?

"Of course I believe in equality...but I’m certainly not a feminist." Such was the catchcry of my late adolescence.

We’ve all heard the warnings to women who rise too far, too fast.

When Self-help is re-framed as ‘Psychology’? Much less stigma.

Think, sipping bacon-smoked whiskey from a Mason jar around a campfire somewhere in the starlit Mid West ... of Brooklyn.

They are three of the most powerful words we can say to survivors of violence.