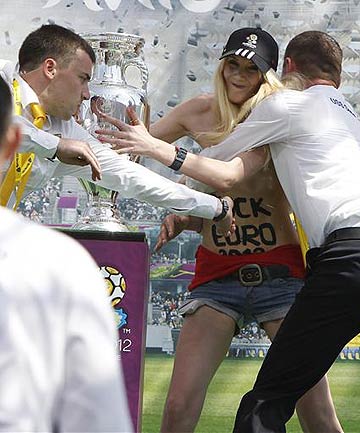 A Ukrainian women's rights activist stripped to the waist and seized the Euro-2012 football trophy while it was on public display in Kyiv in a protest against the forthcoming month-long championship.

The young woman, 23-year-old Yulia Kovpachik, is a member of the Kyiv-based Femen women's rights group which believes the Euro-2012 tournament being played in Ukraine next month will encourage sex tourism.

Kovpachik strode up to the silver, 60 centimetre high trophy, which was on display as a tourist attraction in an open air exhibition in central Kyiv, ostensibly to be photographed alongside it like hundreds of other sightseers.

But she then pulled down her red T-shirt to reveal the words "F--k Euro 2012" scrawled on her torso. As she grabbed hold of the cup with both hands, she was seized by security guards, who appeared to have had advanced warning of the protest.

They covered her with a sheet and took her off to a waiting police car.

The protest appeared to be the first action in a campaign against the championship by Femen which regularly stages bare-breast protests in Ukraine - and sometimes beyond - to highlight what it sees as political injustice, social abuse and the exploitation of women in Ukraine.

Femen says Euro-2012, which Ukraine is co-hosting with Poland next month with the final in Kyiv on July 1, will be a magnet for sex tourists - one of the group's main targets - and will feed a booming sex industry.

About one million foreign tourists are expected in Ukraine for the Euros.

Organisers said the 8kg Henri Delaunay cup was undamaged though Kovpachik appeared to topple back under its weight as security guards seized her. It was still on show in late evening.

Femen's spokeswoman, Anna Gutsol, said Kovpachik, who staged the protest on her 23rd birthday, was released after being told she would have to appear in court on Monday on a charge of hooliganism. The charge carries a maximum fine of 800 hryvnias (NZ$127) and 15 days detention.

Conscious of Ukraine's growing reputation as a new destination for sex tourism, Euro-2012 organisers say they are taking steps to curb prostitution during the month-long tournament.

After Kovpachik's protest, Femen activist Olexandra Shevchenko told reporters: "We came here today to stop this Euro fan low-life from making a bordello out of Ukraine."

City authorities have mounted the trophy in a temporary exhibition area on Kyiv's Independence Square.

Hundreds of sightseers were queuing up under the blazing sun for souvenir photographs alongside it when Kovpachik staged her demonstration.

Independence Square itself will be the centre of a huge 'fan-zone' during Euro-2012, capable of holding tens of thousands of football supporters.