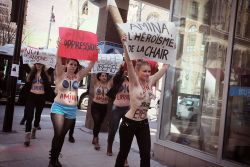 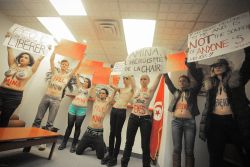 Femen Quebec rallied for a short 15 minutes to avoid being pinned for indecent exposure by police. Photo by Francis William Rhéaume

A group of six women and three men protested in the Tunisian Embassy and around downtown Montreal yesterday condemning the death threats a 19-year old woman received for posting semi-naked pictures of herself bearing slogans against violence against women. On her breasts and torso, she wrote, “my body belongs to me, and is not the source of anyone’s honor,” and “fuck your morals.”

The young woman, Amina Tyler, reached out to the Ukraine-based group Femen, who are internationally known for their topless protests. She has received death threats by stoning since mid-March, when she posted the pictures on Tunisia's Femen site. Her Facebook has been hacked and Montreal-based Femen activist Xenia Chernyshova said that they have not heard from Tyler since.

Chernyshova hopes that the Femen rallies in France, Italy, Canada, Germany, Sweden, Belgium and the UK will help locate Tyler. There are mixed reports of her whearabouts. A French article has her lawyer saying she's safe, and a  press release written by Femen France reported she is being held captive by her family.

"Maybe somebody will protect her. I hope she will go to another country because I’m not sure she’s safe with her family,” the Russian-Ukrainian mother said in an interview where she responded in French and English.

She was deeply moved by Femen’s protests in the Ukraine and decided to start a chapter in Montreal. “In the Ukraine, women have to be composed like ‘little girls,’ they have to be soft-spoken, get married, submissive to men,” she said.  “They have to get their nails manicured, their hair done, put on heavy make-up. They are treated like merchandise.”

Ukraine’s culture of controlling women permeates into the government and economy. “A woman would work as a prostitute or in the underground market to pay for her grandfather’s operation, for example. It’s a survival strategy. There’s a lot of corruption,” she said. “There’s a lot of human trafficking.”

Indeed, a 2011 report found that 800,000 people continue to be traded across Europe and the Middle East, many of whom come from the Ukraine.

Femen receives criticism for catering to the male gaze, for continually objectifying and sexualizing women’s bodies. Muslim women have also slammed Femen's protest yesterday for promoting islamophobia, posting photos of themselves holding slogans such as “Nudity does not liberate me and I do not need saving.”

Shahla Khan Salter, chair of the Muslims for Progressive Values in Canada, which advocates for gender equality, same sex and interfaith unions, and female leadership in mosques, also does not see Femen as a feminist group. In a Huffington Post blog, she said they do not seem to acknowledge those " who do not expose their bodies but still fight for equality and could face harm from extremists as a result."

For Chernyshova, the debate in itself is a starting point. “Obviously it’s not easy to go topless, people criticize women’s cellulite, tummies and flaws,” she said. So when a Femen activist chooses to bear it nude, “she is active, she does not fit into the desired image, she makes a calculated decision with her own body,” Chernyshova said.

Femen’s website indicates that they use “sextremism” as their ideology. One of their mottos is “to mobilize every cell of your body on a relentless struggle against centuries of slavery of women!”

Cherynshova calls it an “aesthetic” movement. “It starts with denouncing the industry of sex. We are against prostitution and pornography. We want to start debating that as a society,” she said.

Because of the influx of immigrant women into Canada, Chernyshova believes that there is a need for feminists to continue fighting for women’s rights. “One of the issues is that young women are continually oppressed by their own families,” she said. She highlighted the Shafia murders as an example, when three Afghani-Canadian young women were murdered by their father in 2009.

Another protester, who chose not to reveal her identity, joined the rally “to show solidarity with Amina,” she said. As an Arab-Quebecer, Nadia Amiri (name changed) understands the difference. “I can go naked without consequence here,” she said, but for Amina Tyler, “she’s breaking taboos.”

Femen labelled April 4 “International Topless Jihad Day.” Amiri saw the protest not as anti-Jihad, she just wanted to show solidarity with Tyler. “When she wrote ‘my body belongs to me, and is not the source of anyone’s honour,’ that really touched me – as a woman,” she said.

Chernyshova echoed Amiri’s perspective, that women in Quebec might be better off, but there is more work to be done. “Here in Quebec the problems are not so much social, but in our intimate lives there is still some things that we need to work on,” she added.

Chernyshova said that Femen Quebec will put together a theatrical show next year as an “artistic-political approach to changing gender roles and collectively changing social problems.”