Two topless protesters caused a scene at Paris Fashion Week in France on Thursday when they jumped on the runway during the Nina Ricci show.

The women, who are reportedly part of Ukrainian feminist protest group Femen, had slogans painted across their bare chests and they ran onto the catwalk shouting “fashion fascism” while the models were parading.

They were grabbed by a burly member of the show’s security team and bundled off the runway. 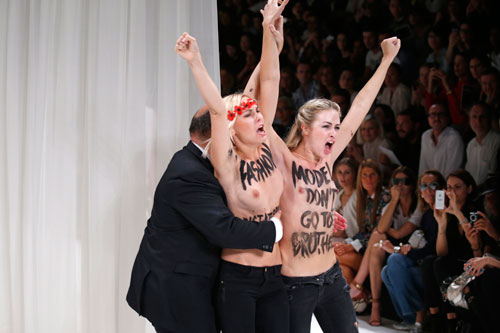 The incident was reportedly part of a women’s rights protest. Members of Femen have previously targeted a Versace runway show over claims the design house was using super-skinny models, and they disrupted filming on Heidi Klum’s reality TV show Germany’s Next Top Model in May when topless demonstrators stormed the show’s stage.