The pair stormed the runway at the Nina Ricci show with slogans “fashion dictaterror” and “fahion fascism” painted on their bodies. The models, for what it’s worth, managed to ignore the party-crashers.

In a statement on the activist group’s Facebook page, FEMEN said the stunt was meant to “condemn the anti human industry of fashion.” 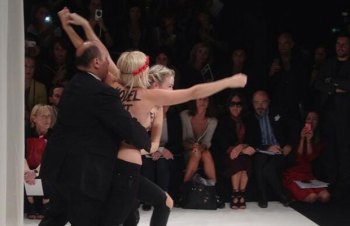 The group also promised further topless attacks “until each and every woman on this planet, will wake up from the suppressors dream and will reclaim her body to proclaim her own rules about everything. We claim our body for ourselves; we reclaim our sexuality and our stolen beauty! We rebel against the exploitation of women in the fashion industry!”

FEMEN started in 2008 to protest sex tourism ahead of the UEFA Euro soccer cup, which brought millions of visitors to a country known for its brothels and red light districts. It has since grown its message of “sextremism” to include critiques of religion.

Although FEMEN activists still only number in the hundreds, there are members and sympathizers around the world. In July, a small group of topless protesters took to Parliament Hill in Ottawa to call for the return of Nathalie Morin, a Montreal woman stranded in Saudi Arabia.

The use of nudity to raise awareness about the exploitation of women in the sex trade was meant to garner maximum media interest in an otherwise under-covered subject, but even some of the group’s erstwhile supporters have distanced themselves from FEMEN over time. Critics accuse FEMEN of promoting itself as a brand before focusing on the actual issues, claiming the group also has xenophobic and Islamophobic tendencies.