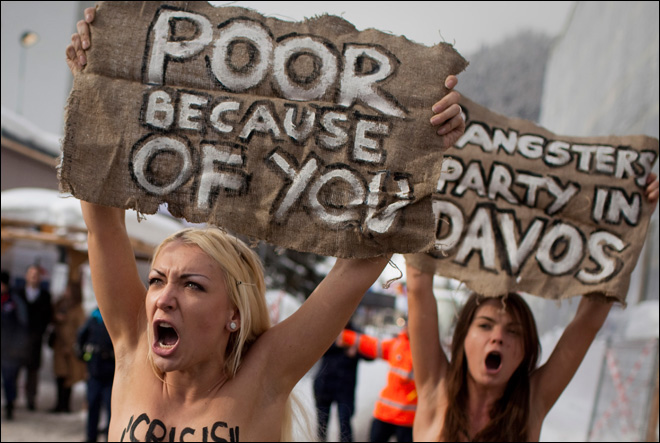 Three topless women were arrested outside the World Economic Forum meeting in Davos, Switzerland today for trying to scale the wall into the meeting.  The meeting is comprised of the CEO’s of several global corporations and political leaders who help determine world economic policies.

With temperatures approaching zero, the women took off their tops and had several messages written across their torsos.

“Crisis! Made in Davos,”  “Poor, because of you” and “Gangsters party in Davos.” the women’s bodies said.

The women were form the Ukrainian Feminist group FEMEN. They have staged small half naked protests across Europe and Russia to protest a wide range of women’s issues including prostitution, women’s participation in government and economic opportunities for women.

Inna Schewcenko, a spokeswoman for the group told a local new station,

“We came here to Switzerland to Davos to explain the position of all poor people of the world, to explain that we are poor because of these rich people who now sit in the building,”

The Occupy movement was also on hand to lend their voice to the protest movement, although they did not coordinate with the FEMEN group.

The Occupy Protestors were holding signs and chanting

“If voting would change anything, it would be illegal” and “Don’t let them decide for you, Occupy WEF.”

The group marched on the meeting but stopped more than 100 yards from the police barrier erected to keep them out.

The topless protest has gathered worldwide news coverage in no small part because it isn’t everyday that beautiful women take off their clothes to protest for social justice.

Do you think the Topless FEMEN protests are effective?