For the first time, members of Ukrainian protest group Femen face a criminal case, though not for stripping in public for women's cause.

Anonymous activists of the feminist group face a criminal case in a court in the Ukrainian capital Kyiv for their topless protest on the balcony of Indian ambassador Rajiv K. Chander's residence on January 18, during which they tore down the Indian Tricolour.

The activists were protesting against India's alleged visa crackdown against women from some former Soviet states. The government has reportedly asked the country's diplomatic missions in Ukraine, Russia, Kazakhstan and Kyrgyzstan to tighten the overview of visa applications by women aged 18-40 in an attempt to curb the inflow of sex workers to India. 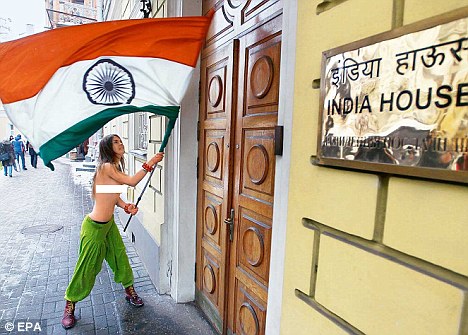 About 40,000 tourists from the Central Asia republics and more than 70,000 from Russia visit India every year. A large number of women from some of the Central Asian republics travel to India to work as prostitutes.

The Femen protesters, baring their breasts even in sub-zero temperatures, climbed the balcony of the ambassador's residence with placards bearing slogans such as 'Ukraine is not a bordello', 'We are not prostitutes', 'Delhi, close your brothels' and 'We demand apologies'. 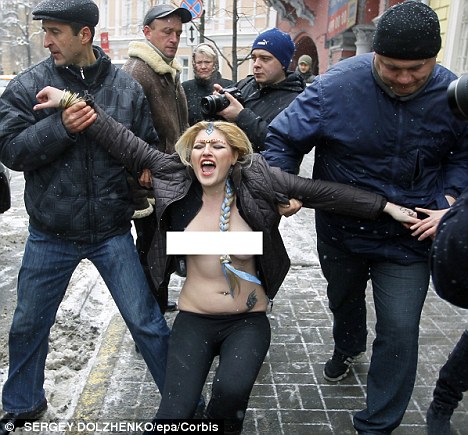 Ukrainian policemen arrest one of the activists protesting in Kyiv 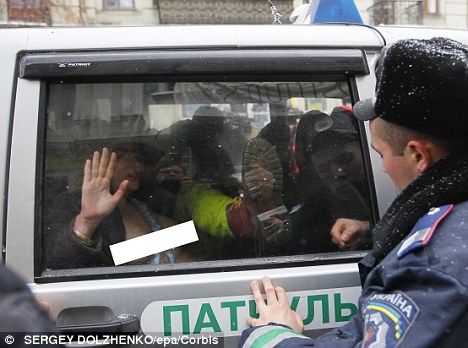 A press release by Femen stated: 'The problem of prostitution in India is not dependent on women from Ukraine, Russia or Kazakhstan. It is directly linked with criminal impunity for the pimping business within India itself.'

The protest has landed the activists in trouble as two cases were filed against them on charges of hooliganism and desecration of state symbols.

The Ukrainian police said they may end up in prison for up to four years.

Femen was founded in Kyiv in 2008 and has mostly women university students as its members.

The group is known for staging topless protests in Ukraine and outside for all causes concerning women, from sex tourism to Silvio Berlusconi's peccadilloes.