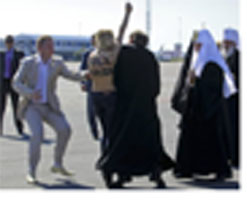 The demonstration was described as an ‘Islamic marathon’ by the protesters. Some of the women had slogans marked on their bare chests that read ‘No Sharia``.

Its stated goals include developing ‘leadership, intellectual and moral qualities of the young women in Ukraine’ and to ‘build up the image of Ukraine, the country with great opportunities for women’.

In a statement published on its Facebook page, the protest group said a number of its French members had been arrested.

It called on the IOC to ‘condemn violence towards women from Islamist states’. “Femen requires the states that apply the laws of sharia be shut out of the Olympic games, because of the inhumanity of these laws, which are in total contradiction with Olympic principles that are peace and philanthropy,” the group said.

“Femen accuses these states of simulating democratic changes regarding the position of women,” Femen added.

“With the support of the IOC, these Islamist governments use the participation of women in the Olympic Games to hide thousands of victims and dead” it said.