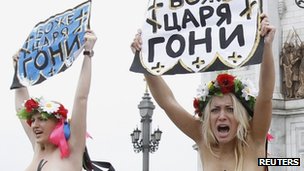 A Ukrainian women's group which specialises in topless protests says three of its activists were kidnapped and abused in Belarus.

Three members of Femen were seized on Monday after a topless protest in the Belarusian capital Minsk before being abandoned in a forest, they said.

They had been protesting on the first anniversary of President Alexander Lukashenko's disputed re-election.

The group says three women were blindfolded, taken to a forest, doused with oil and made to strip. Then they were threatened with being set on fire, and with a knife which was used to cut their hair.

Femen says the ordeal was filmed, and the women were then left in the forest naked, with no documents. They managed to make their way by foot to a small village.

The Ukrainian embassy in Minsk has not confirmed Femen's allegations, but told the BBC that a diplomat was on his way to the region where the woman were left to investigate.

Belarussian security services declined to comment on Femen's claims. A spokesman had described the group's protest in Minsk on Monday as "a provocation".

The three protesters had bared their breasts and demanded freedom for political prisoners.

Demonstrations are relatively rare in Belarus, where the authoritarian rule of Mr Lukashenko has led to sanctions by Western governments.

In December 2010, authorities cracked down on protests against alleged vote-rigging in the general election.

International monitors said the contest, in which Mr Lukashenko officially won 80% of the vote, was deeply flawed.