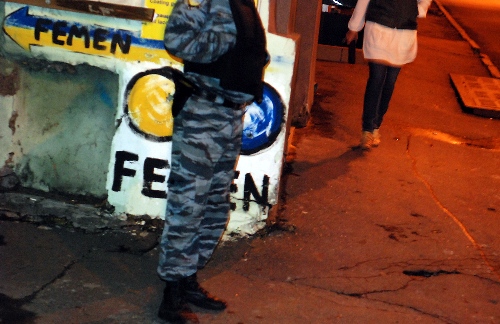 A security officer in Kyiv, Ukraine stands by if needed to arrest FEMEN members in August 2012. Image: FEMEN

(WNN/VOA) Kyiv, UKRAINE: At first, protests by Ukrainian feminist group Femen were ignored by the media.  But two years ago the women started taking off their shirts.  In recent months, their tactic has spread to France, Canada, and Brazil.

“When we mixed nakedness, intelligence and our ideas, we saw that it is working,” she says.  “People saw this contradiction, they are not ready to see, and to listen to women, and to see aggressive women, naked, aggressive women.”

Coming from Eastern Europe, Ukraine’s Femen and Russia’s Pussy Riot band represent a new kind of feminist protest, theatrical and radical.  In Kyiv, activists train regularly for protests.  Behind the training is anger that Eastern European women are 30 years behind Western European women, in salaries and in job discrimination by employers.

“They say, ‘You will get married in a few years, or even like, in a few months you will be pregnant, like you are not a good worker, I don’t want to have you in my office,” Shevchenko says. “Or, like the second way to work there, they say that you have to sleep with me, we have to have sex.  And we can do nothing.”

Shevchenko says, “We have a lot of sex tourists here in Ukraine.  Because nobody cares about that, nobody wants to stop this problem.”

The sex industry thrives in Ukraine, a country where women score high in beauty and low in income.

“There are many websites that advertise Ukrainian women, because Ukraine girls are beautiful.  But, unfortunately, many are undereducated and want to become a wife of a rich man, their knight on a white horse,” she says.  “But in actuality, it is only like exporting human flesh, and it is illegal.  We are trying to explain to these girls that it is not a real way to a good life. “

Shevchenko, 24, has to juggle her feminism with the traditional expectations of her mother and grandmother.

“They imagine for me another life,” says Shevchenko, who grew up in a mid-sized city in Western Ukraine.  “They wanted to see me as a wife and a mother.  And each single day when my mom calls me she says, ‘When I will have my grandchildren, did you find a man?’  And I do not know what to answer her.”

But Shevchenko believes she can have it all.  A few weeks ago, she helped to open Femen’s new office in Paris.  She says she met several interesting Frenchmen, men she calls ‘male feminists.’